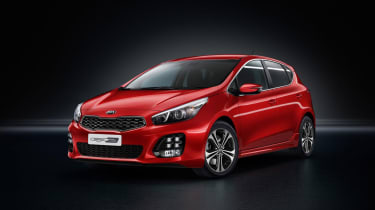 The Kia Proceed GT is an unlikely hot hatch hero. It’s not the fastest in its class, nor possessed of the sharpest steering or most desirable badge. It is however surprisingly good fun for very little outlay, and looks great too.

Kia has taken those looks and applied them to a new GT Line model, making its debut at the Geneva motor show on March 3.

In place of the turbocharged 1.6-litre engine though is an all-new 1.0-litre T-GDI unit, the latest downsized three-cylinder unit to hit the market.

It replaces the old naturally-aspirated 1.6 GDI unit in the Ceed and Proceed range, and delivers the usual on-paper benefits – greater reserves of torque at lower revs, better fuel economy and lower CO2 emissions. 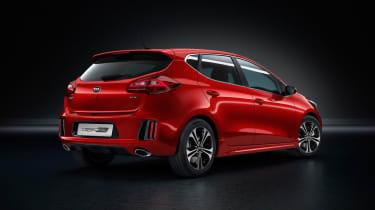 In terms of styling, the Ceed, Proceed and Ceed Sportswagon GT Line models take inspiration from the range-topping GT models.

That means a similarly prominent body styling kit with deeper front and rear bumpers and a set of side skirts. It also includes the GT’s unique ‘ice cube’-style daytime running lights mounted low on the front bumper.

Wheels are 18 inches in diameter rather than the GT’s 18in items, though a set of dual exhausts still features at the back. Inside, GT Line Ceeds are characterised by grey, white and black upholstery with grey stitching, GT Line logos and the same piano black dashboard trim and aluminium pedals as the full-fat GT. Gone, sadly, are the GT’s figure-hugging Recaro seats.

GT Line models make their debut in Geneva, and go on sale to customers from the fourth quarter of 2015. Pricing will be revealed closer to launch.