Kia’s rear-wheel drive Stinger has been updated inside and out, with more customisation on the menu 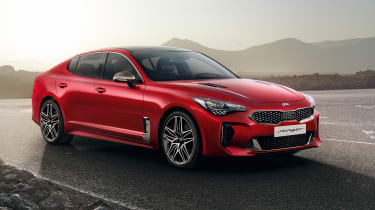 The Kia Stinger GT hit the road in 2018 as an alternative V6-powered rival to the Audi S5 Sportback and BMW 440i Gran Coupe, and now two years on has been given an update. The changes have focused on refining its looks, improving quality and updating the interior tech.

At the front you’ll find subtly redesigned LED headlights, with tweaked optics and darkened lenses. The rear has more substantial changes, with a new diffuser surrounding enlarged quad exhaust tips. The rear lighting has also been redesigned with a now de-rigueur lightbar spanning the width of the rear rather than just illuminating the outer sections like before.

> Kia Stinger review – don't be put off by the badge, the Stinger deserves your attention 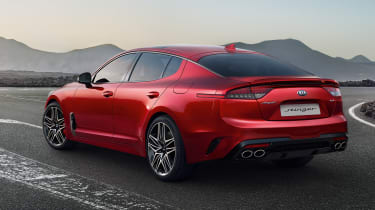 A host of new driver assistance systems and tech have also been introduced, ranging from the ability to connect more than one Bluetooth device at a time, to the new optional 7-inch instrument cluster and the ‘Blind-Spot View Monitor’, displaying video feeds of blindspots in the instrument cluster at critical points.

A 3.3-litre twin-turbocharged V6 remains the most potent offering, and although it has received no upgrades the use of a more free-flowing valved exhaust system has marginally lifted power. 368bhp is now available at 6000rpm, with torque unchanged at 376lb ft - this is sent to the rear wheels via an eight-speed torque converter automatic. Lesser four-cylinder turbocharged petrol and diesel models are also available.

UK market pricing and specifications will be confirmed closer to the models release locally in 2021, but for context the current model will cost you from £32,925, rising to £41,145 for the V6-powered GT-S.