Volvo races the most powerful road car evo has ever tested against a lorry. Naturally... 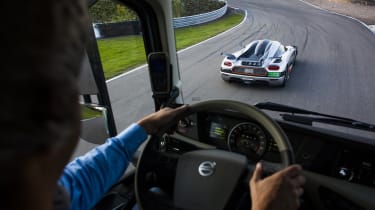 evo doesn’t routinely feature trucks, but the Koenigsegg One:1 is very much up our street. Jethro drove it in evo 202 and called it, among other things, ‘terrifying and hilarious’.

An eight-tonne Volvo FH truck, you might think, is not the sort of vehicle you’d pit against the world’s first ‘Mega car’. But that’s what Volvo has done in its latest video, titled simply ‘Volvo truck vs Koenigsegg’. You briefly envisage some kind of terrifying game of chicken, or perhaps a tug of war. But no, it’s a race that Volvo has in mind.

Even with a 13-litre, 533bhp turbocharged diesel engine and Tiff Needell behind the wheel, the contest is akin to a chain-smoking fast-food addict lining up alongside Usain Bolt for the 100m sprint. The One:1, featuring one metric horsepower (1360PS, or 1341bhp) for every kilo it weighs, is a whole new kind of fast. In order to stand some sort of chance, the Koenigsegg received a handicap – it would circumnavigate the Knutstorp race track in southern Sweden twice, whereas the Volvo FH drives only a single lap.

The purpose of the race is to put Volvo’s I-Shift Dual Clutch truck gearbox to the ultimate test. In essence, the transmission is similar to that of dual-clutch gearboxes used for years now in production vehicles. The claims are the same too - the new I-Shift Dual Clutch improves driveability and makes the flow of power seamless, with performance and fuel economy benefits.

In the video it’s evident that Tiff is enjoying his first high-rise racing experience, but the racer, TV presenter and evo contributor admits he was impressed. ‘The truck definitely has the heart of a sports car,’ he says. But which wins? Watch Volvo’s video below to find out, and check out our interview with Christian von Koenigsegg to hear more about the spectacular One:1.