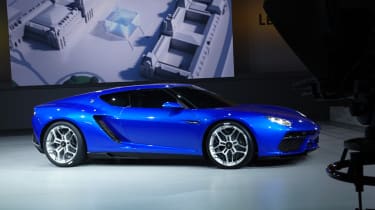 Sending power to all four wheels, the Asterion can sprint from 0-62 in 3secs and all the way on to 199mph. But thanks to its electric assistance, as little as 98g/km of CO2 is produced and an impressive 57mpg is achievable, making this the most environmentally friendly Lambo ever.

602bhp and 413lb ft of torque comes from the Huracan sourced combustion unit, with the remaining 294bhp coming from the electric motors. One of these motors is mated to the engine and sends drive to the rear through the seven-speed dual-clutch ‘box, whilst the other two sit on the front axle and power the front wheels.

A useful 31 miles can be covered in this mode before the V10 needs to be fired up, with the two front electric motors pulling the Asterion along at up to 77mph. Thanks to its all carbonfibre chassis, the added 250kg of hybrid equipment is greatly offset to maximise this eco-potential.

The batteries have been seated in the chassis’ central tunnel with the gearbox sitting behind the mid-mounted engine, keeping the centre of gravity low and weight distributed across the length of the car.

Instead of contending with the hybrid hypercars produced by Porsche, Ferrari and McLaren, the Asterion has been created to demonstrate a more relaxing Lambo experience. President and CEO, Stephan Winkelmann confirmed: ‘The Asterion was conceived more for comfortable luxury daily cruising than ultimate track performance.’

How a power output nudging 900bhp could be considered anything less than brutal boggles us, but there’s at least no doubting the Asterion’s styling is certainly a little ‘softer’ than its production stablemates. A raised tail and long nose appear more grand tourer than fully-blown supercar, whilst a tall roofline (by Lambo standards) and less steeply raked windscreen suggest the interior will be roomier than we’re used to.

Inside, the concept features leather seats sat higher than usual, a raft of carbon, titanium and aluminium trim and a portable touch-screen tablet to control infotainment.

Though there’s no word of if the car could ever make production, Lamborghini has confirmed the tech developed in its creation will likely trickle into production cars soon. No doubt we’ll be a seeing a hybrid Lambo in showrooms very soon then.