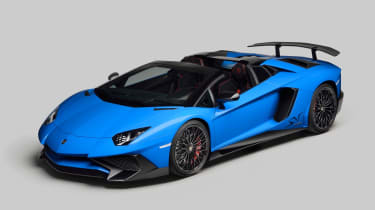 Lamborghini has revealed the first images and details of its range-topping roadster, based on the 740bhp Aventador SV.

If you’ve ever been concerned that Lamborghini was losing its ability to stun, perhaps the Aventador SV Roadster will be the car to convince you otherwise. Performance on par with its coupe equivalent, and even more dramatic styling with the roof panels removed, gives it the wow factor many have been craving for.

Power is provided by the same 6498cc V12 as that of the coupe. Maximum power of 740bhp is developed at 8400rpm, while there’s a healthy 509lb ft of torque on offer from 5500rpm. It uses the same seven-speed ISR automated manual transmission, too – with shifts that Jethro Bovingdon described as ‘thumping home with savage intensity’ when he drove the coupe in evo 211.

The bare figures aren’t shamed by those of its closed-roof equivalent. While weight has increased – the Roadster’s dry weight of 1575kg sees the car gain 50kg to lose its roof – the 0-62mph time has dropped by just one tenth, now 2.9sec. Top speed is harder to determine – Lamborghini quotes a maximum of ‘more than 350km/h’ (that’s 217mph plus), just as it does with the coupe.

The top itself comprises two carbonfibre panels each weighing less than 6kg and removed and refitted using a quick-release system. Lamborghini says the hardtop panels have been ‘fully optimised’ in a wind tunnel, no doubt contributing to the coupe-matching top speed. 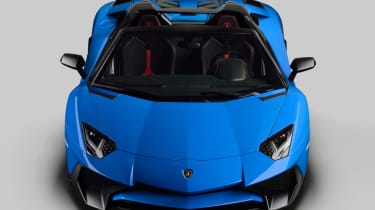 At the same time, the SV Roadster features a rear window panel that can be raised and lowered by the driver – effectively serving to reduce noise and wind when the roof panels are removed. The interior is like that of the coupe, with Alcantara trim throughout.

Exterior options extend to five standard colours, plus Lamborghini’s Ad Personam options. The colour shown in these early images, Blu LeMans, is one of those options. 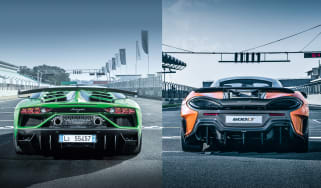