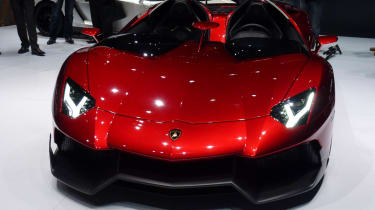 7
Check out our A-to-Z list of stories from the 2012 Geneva Show
Lamborghini’s pretty good at stealing a motor show, and Geneva 2012 is little different. The Aventador J knocks spots of just about every other concept and supercar, including even (perhaps!) the F12 revealed by arch-rivals Ferrari. Getting onto the show stand to see the J in the carbon involves a lot of unruly elbowing.

Subscribe today to have every issue of evo delivered straight to you. You'll SAVE 39% on the shop price, and get evo for its original cover price for a whole year!
Subscribe now
Underneath it’s a ‘normal’ Aventador - a 690bhp, 6.5-litre V12 engine powers all four wheels via a seven-speed ‘ISR’ gearbox, while there’s racing car-like pushrod suspension.
Up top, though, the J is unlike any other Lamborghini. It’s longer and lower, measuring just 1110mm in height. It’s described as ‘supremely open’ – a fact you can’t really argue with. There’s no roof or windscreen, while the driver and passenger sit in a dramatic split cockpit (Lamborghini’s vertically opening doors remain though). And with no air-con fitted either (for presumably obvious reasons), there’s a distinct weight saving over the production-spec Aventador.  The downside is, in Lamborghini’s words, ‘the right clothing is prerequisite for every trip’.
There’s plenty of carbon technology too, on top of the Aventador’s already groundbreaking carbonfibre structure. The front end gets a carbon air scoop with F1-style winglets while the striking alloy wheels get carbon inserts that act as fans for additional brake cooling. And the seats are trimmed in ‘carbonskin’, a woven carbonfibre fabric patented by Lamborghini which it forsees making it to high-end clothing too. Perhaps to protect Aventador J owners in adverse weather…
There will only be one owner, though, with the J concept (its name both inspired by the Miura Jota of the 1970s, and ‘Appendix J’ of the FIA’s motorsport rulebook) an absolute one-off. It’s road legal though; here’s hoping the lucky owner obliges the efforts of Lamborghini’s engineers and uses it properly.
Check out our A-to-Z list of stories from the 2012 Geneva Show
Follow us on TwitterFollow us on FacebookEmail us 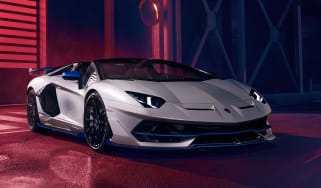