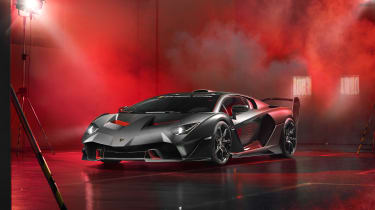 We’ve seen racing teams getting involved with road-car development in the past, but rarely for a single, bespoke model. Lamborghini’s racing arm Squadra Corse has done just that though, revealing its road-legal, but track focussed one-off called the SC18 Alston.

The SC18 Alston is based on the same carbonfibre-intensive chassis as the flagship Aventador SVJ, but takes much of its aerodynamic inspiration from the racing world, mimicking elements from both the Huracan GT3 and Huracan Super Trofeo EVO. Lamborghini is no stranger to outlandish aero appendages on its series production models, so it’s no surprise to see an intricate and aggressive combination of splitters, vents and dive planes adorn the complex and contemporary design. A highlight is that massive rear wing, flanking the entire rear fascia and eventually leading down to form part of the rear splitter.

> Click here for more on the Ferrari SP1 and SP2 Monza

Look closely and you’ll see the headlights are borrowed from the Aventador, but the rear units are much closer to the limited edition Centenario, formed by a wide, thin bar of LED lighting. The intricate centre-lock wheels are bespoke and help reinforce the road-racer feel, which are then wrapped by colour coded 20- and 21-inch Pirelli tyres.

Under the intricate carbonfibre engine cover sits the familiar 6.5-litre naturally-aspirated V12 engine, delivering 759bhp at 8800rpm, with 531lb ft of torque available at 6750rpm. These figures you might recognise from the recently launched Aventador SVJ. As in that car, the power is transmitted to a heavily rear-biased all-wheel drive system, with an old-school single clutch semi-automatic gearbox taking care of the changes.

Lamborghini has not mentioned which lucky customer the bespoke model is going to, nor the hefty price he or she paid for it, but with an excess of one-off multi-million pound hypercars being produced for the world’s wealthiest car fans, we suspect that this will not be the last one-off Lamborghini to come out of its Squadra Corse racing department.