The German tuner has turned its hand to one of the world's fastest SUVs, adding more width and more power 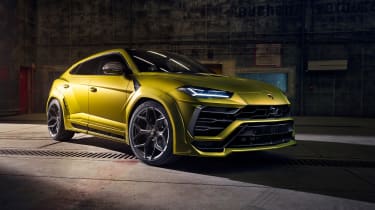 SUV or not, the Lamborghini Urus is a fast machine. Widely regarded as the fastest SUV on the planet, it rolls out of the marque’s Sant’Agata factory gates with 641bhp and a 189mph top speed. Predictably, this wasn’t enough for Novitec, and so it’s turned it up even further…

Thanks to the use of two new ECU modules on each cylinder bank of the 4-litre twin-turbocharged V8, injection, boost pressure control and ignition are altered in order to extract more performance. The result is a 130bhp and 134lb ft of torque increase over standard, bringing the total figures to a rather silly 771bhp and 761lb ft of torque. As if this wasn’t enough, the latter number can be had at just 2900rpm.

> Lamborghini Urus review – is this the first super-SUV?

The 0-62mph sprint now comes in 3.3sec, around the same as a Ferrari 458, and top speed at 192mph. Two lesser states of tune can also be optioned should this be a little too much for you.

Also included in the kit is a new exhaust system, offering marginal performance gains through less restrictive catalytic converters, and of course, more sound – this can also be optioned with or without flaps, depending on whether or not you like your neighbours… 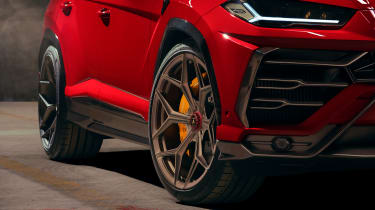 No tuned SUV would be complete without a widebody kit, and this is certainly no exception. The brand’s Esteso kit adds 10cm of width to the front and 12cm at the rear, alongside more aggressive bumpers, a roof lip and a front splitter. Any components that were black plastic from the factory can also be switched to either standard carbonfibre or the ‘forged’ kind, and at an additional cost, you can even have an entirely new bonnet made from the material.

Through Novitec’s partnership with US wheel manufacturer Vossen, 23-inch forged wheels are on offer, wrapped in 285 (front) and 325 (rear) tyres – these are also available in multiple finishes and 72 different colours. To allow the new wheels to sit properly in the new bulging arches, the tuner tweaks the model’s factory air suspension to lower ride height by 25mm.

Pricing and availability hasn’t been revealed.