Production of Lamborghini's Murcielago V12 supercar comes to an end. A gallery of its life 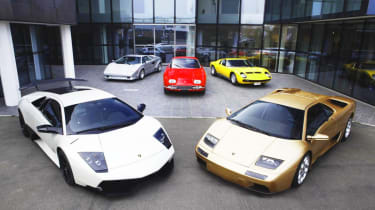 It’s official – the final Murcielago has rolled off Lamborghini’s production line. Naturally, this is the ideal excuse for us to take a trip down memory lane and look back on the life of one of the modern-day great supercars, with a few pictures to gander at for good measure. It’s hard to believe that we first saw the jaw-dropping shape of the Murcielago back in 2001, particularly as the Luc Donckerwolke-penned lines still look so fresh today. Back then of course, it was going up against the soon-to-be-launched Ferrari Enzo and Porsche Carrera GT, both of whom it beat to the marketplace. Arguably the most significant aspect of the Murcielago is the fact that it was the first car to be built by Lamborghini under Audi stewardship. Before then, the traditional Lambo recipe had always been an intoxicating blend of speed, wild styling and general excitement – but this usually came at the expense of any consideration for quality or practicality. The birth of the Murcielago was a revelation in what could be done with the commercial giants of Audi on board – yes, it retained all the attributes of Lambos of old, but managed this while at the same time being relatively easy to live with. Power for the first generation of Murcielagos came courtesy of a 6.2-litre mid-engined V12, pushing out a not-inconsiderable 570bhp through a six-speed manual gearbox. This clout enabled it to hit 60mph in a mere 3.8sec and a top speed of 205mph. A Roadster variant was added to the range in 2004, and sales for the first generation car totaled 1500 (approx). When evo first put the Murciélago through its paces back in 2002, we commented that it felt ‘lighter and more wieldy’ than its predecessor the Diablo, but compared with the Zonda we were testing it against, it was afflicted by ‘slow and numb steering’, and brakes which lacked the kind of feel we were expecting. The brake issue, at least, was sorted in early 2006 when carbon ceramic discs were fitted as part of a minor update, but it wasn’t until the comprehensively revised car – the LP640 – was released later that year when the Murcielago really came to life and showed us what it could do given the right hardware. Capacity was up by 304cc, increasing power to 631bhp, and you now had the option to spec up your Murcielago with the six-cog E-gear sequential semi-auto gearbox. All of which meant that the range-topping Lambo would now hit 211mph. As for evo’s verdict on the changes, our drive in the July 2006 issue depicted a generally much sharper driving tool. Whereas the outgoing model was a tad uninvolving, the LP640 was anything but, combining an addictive dose of power with sublime handling. Lambo then went a bit mad, 2008 giving us the Reventon, which was essentially a reworked Murcielago with a slight power hike and a body influenced by a stealth fighter. Costing the small matter of £1million each and with production limited to just 20 cars, it was always destined for the collector’s garage. And then, in 2009, came the LP670-4 SuperVeloce, the ultimate driver’s Murcielago and an appropriate swansong to one of the most exhilarating cars to come out of Italy in the last decade. As well as a further 30bhp, the SV was lighter than the standard car to the tune of 100kg. Aerodynamics were also given a comprehensive fettling, with a towering rear wing the most obvious testament to this. The SV came complete with some fairly mind-boggling figures, the most eye-catching of which were a 3.2sec 0-60mph-time and a power-to-weight ratio of 429bhp per ton. Production was limited to 350 cars. In 2009’s Car of the Year feature, we declared that the Murcielago SV ‘could be the greatest Lambo ever.’ A fitting tribute, and one which gives its much-vaunted successor, due for debut next year, a hell of a lot to live up to.