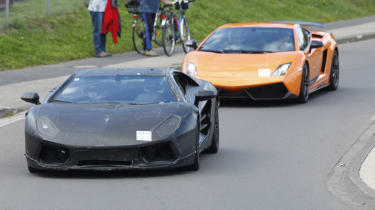 With the production of Lamborghini’s Murcielago now finished (see evo’s story here), Lamborghini is getting ready to introduce its replacement. It’s speculatively known as the LP700-4 and will be shown at the 2011 Geneva motor show early next year.

And last week Lamborghini gave evo a sneak preview of the new car’s all-new powertrain. From what we saw, it looks like it’s going to be spectacular: an all-new, 690bhp V12 engine, with power reaching the road via a revolutionary seven-speed paddle-shift gearbox. This means, for the first time ever, Lamborghini’s flagship model will not be available with a manual transmission.  All-new, 6.5-litre V12 engineThe only fixed parameters given to Lamborghini’s engine design team was that the new car had to remain V12-powered, with an angle between the two banks of cylinders of 60 degrees and a request for the overall height of the engine to be reduced in order to help improve the handling. The end result of this development process is a completely new, 6498cc V12 engine producing 690bhp at 8250rpm and delivering a heady 509lb ft of torque at 5500rpm.  First off, the sheer size of this engine is amazing. Launching a brand new, 6.5-litre normally aspirated engine is almost unheard of these days, but Lamborghini boss Stephan Winkelmann explained to evo that he felt it was essential for the new car to have such a large displacement engine if it was to remain true to the DNA of Lamborghini super sports cars. ‘A Lamborghini engine needed to be able to supply massive power over a huge range of revs as this is a major part of the unique Lamborghini driving experience’, he said. Despite being similar in capacity to the outgoing V12 (which was 6495.7cc in size), this is a completely new engine known internally as the ‘L539’. For starters, the cylinder bore has increased from 88mm to 95mm while the stroke has reduced from 89mm to 76.4mm. This allows the new engine to rev even quicker than before as piston speed is reduced for any given revs (compared to the old unit) and, thanks to that big increase in bore size, both the inlet and exhaust valve diameters can be increased too. This allows for much better engine breathing. The compression ratio has also been increased to 11.8:1, a remarkable figure for such a large engine. Next, the new engine is a ‘dry sump’ design meaning the engine oil is contained in a separate reservoir from where it is pumped around the engine before being scavenged again at the base of the engine and then returned to the main reservoir. The engine is physically smaller now, as the block is shorter because of the smaller stroke and the facts there’s no sump at the base of the engine. The dry sump system also means the oil supply around the engine is more reliable during periods of high cornering G or heavy braking; the reason why most race cars have this system of lubrication.  Overall then, the new engine weighs in at 235kg (down from 253kg) and measures just 784mm in height, allowing it to sit some 60mm lower in the chassis than the Murcielago’s V12. This should aid handling as the roll height and centre of gravity will be reduced accordingly. All new seven-speed gearboxThis new Murceilago replacement gets a completely new seven-speed gearbox which Lamborghini refer to as being an ‘ISR’ transmission, standing for ‘Independent Shifting Rods’, here’s how it works. On a conventional gearbox, second gear sits next to third gear on a shaft running through the gearbox, and as you move the gearstick from second to third, a selector fork moves a sleeve from one gear to the other, allowing the next gear to come into play.  On this new gearbox, though, the gears are engaged independently. So in the same example of changing from second to third, the third gear selector can be partway through the process of bringing the gear into play as the second gear selector is taking second gear out of drive. This means the speed of change can be shortened dramatically, Lamborghini is saying changing gear via a paddle on this new gearbox will take just 50milliseconds, some 40 per cent faster than on the very latest e-gear equipped Lamborghini Gallardo. Another requirement was for this gearbox to carry all the hydraulic valves and piping internally within its casing, so reducing the overall size of the gearbox dramatically.

Fitting a dual-clutch transmission to this new car was dismissed very early on - this type of gearbox would weigh a lot more than the new single clutch gearbox does, as well as being physically bigger too, so packaging would have been much trickier.  Winkelmann doesn’t like the feel a modern DSG gives either, preferring the more aggressive action of the new gearbox, saying it gives the driver a more emotional link with the mechanicals of the car than a dual-clutch transmission gearbox ever could. The car has an updated four-wheel drive system. And Lamborghini is making great play of a new master ECU that controls the requirements of the engine, gearbox and all-wheel drive transmission all in real time, rather than each component having it’s own ECU.  More details of this new Lamborghini LP700-4 (including its full name, which has been rumoured to be Jota or Aventador) will be released in the near future. But from what we’ve seen so far, it looks like the Murcielago replacement should be very special indeed.