Lamborghini reveals the new Aventador LP700-4, its fastest, most powerful supercar yet. News and pictures here 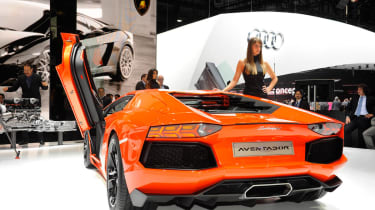 Meet the Lamborghini Aventador LP700-4, the first all-new Lambo production car in eight years. It replaces the much-loved Murcielago, which has been on sale since 2001. The new Lamborghini gets its full unveiling at the 2011 Geneva motor show. And while the Aventador’s styling is a clean evolution rather than a striking revolution, the rest of the car is box-fresh. The engine, gearbox and carbonfibre chassis are all brand new. Grabbing all the headlines will be the new, mid-mounted, naturally aspirated 6.5-litre V12, which boasts 690bhp and 509lb ft. That makes the Aventador the most powerful Lamborghini yet, and with a claimed 0-62mph sprint of 2.9sec and a 217mph top speed, it is also the fastest. Peak power is delivered at a heady (and no doubt pretty sonorous) 8250rpm. The gearbox sits in front of the engine, and is a unique, freshly designed single-clutch automated manual. It has seven speeds and is designed to possess the speed and polish of a typical twin-clutch affair. Gearshifts take just 50 milliseconds. As with the bulk of Lamborghini’s recent supercars, the Aventador is all-wheel drive, though with a more rearward bias than before. The suspension is a Formula 1-style inboard pushrod spring and damper set-up, a system previously seen on only the most expensive hypercars, such as the Ferrari Enzo and Maserati MC12.  Carbonfibre features heavily in the Aventador’s construction, not least in the one-piece tub which surrounds the passenger. It weighs just 147.5kg but is extremely strong, and helps contribute to a 1575kg kerbweight, a 90kg saving over the Murcielago. And, of course, there’s a lick of bright orange paint and a pair of dramatically opening doors. The Lamborghini Aventador LP700-4 should certainly have the might and the technology to challenge its latest V12 Italian rivals, the Ferrari FF and Pagani Huayra, both on the Geneva show floor and when we eventually drive all three. Can’t wait… See evo Issue 155, on sale Wednesday March 2, for the full Lamborghini Aventador LP700-4 story