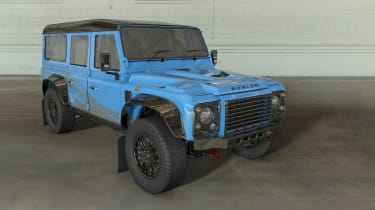 Off-road racing specialist Bowler has announced it will build a high performance version of the classic Land Rover Defender under licence from JLR from next year. Bowler is noted for its experience in building Land Rover Rally Raid competition cars based on a bespoke space-frame chassis and the new model codenamed CSP575 will be developed in conjunction with JLR’s Special Vehicles department as a high-performance road-legal off-roader.

Powering the CSP575 is JLR’s 5-litre supercharged V8 engine in one of its more potent 567bhp forms. Despite the familiar aluminium panels outside, the new model will be built on Bowler’s own high-strength steel chassis, with an integrated roll-cage and different suspension options. No estimated performance figures have been revealed, but we’d suggest it’s closer to one of Bowler’s competition cars than the final-run Defenders with their Ford-derived four-cylinder diesels.

The interior will feature four-individual chairs and initially be built in a rally-specification, but more luxurious models will be on the cards for those wanting a more comfortable on-road experience.

Bowler Motors and JLR’s SV department will share development of this new model, with JLR allowing Bowler to access its multitude of testing and prototyping facilities. The cars will be built in Bowler’s Derbyshire manufacturing facility, which given the firm’s non-OEM (Original Equipment Manufacturer) status, will be able to sell road-registerable models without the need to comply with modern emissions regulations. 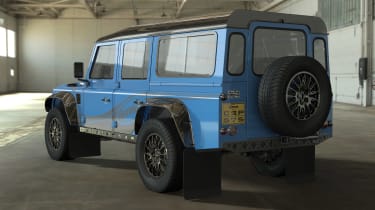 Bowler Motors was acquired by JLR in 2019, acting as a new subsidiary of the wider brand. As part of the deal, Bowler’s external manufacturing team will be assisted by JLR’s SV department in engineering Land Rover technology and components into the new package. We also expect that Bowler’s influence will eventually find its way into Land Rover’s official model range, with the new Defender ripe for co-branded special editions to diversify the range.

Although not limited, Bowler’s classic Defender will be built in small numbers for buyers in the UK and Europe initially, with introductions to other markets to be considered at a later date. Bowler’s new Defender will cost from an estimated £200,000, not surprising given the bespoke nature of the project.