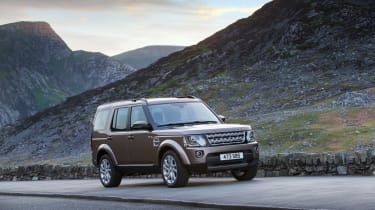 It matters not one bit which Discovery you choose, as all now come with the same SDV6 3.0-litre engine producing 252bhp. That peak power is available at 4000rpm, though the more important number relating to the V6 is the 442lb ft of torque that it puts out. That arrives at just 2000rpm, which is useful when the quoted kerb weight is ‘from’ 2589kg - and a chunk more if you’ve ticked a lot of option boxes.

Land Rover says it will reach 60mph in 8.8 seconds, while the 0-62mph dash adds half a second to that for 9.3 seconds. Weight and the sheer size and shape that twin-turbocharged V6 diesel is having to push though the air means it tops out at 112mph, though the wind noise above UK motorway speeds is likely to temper your enthusiasm for any high-speed runs.

If you’ve stepped out of a BMW X5 xDrive40d (with 308bhp), either of Porsche’s diesel Cayennes or even Merc’s entry-level 2.1-litre four-cylinder M-Class the Discovery’s performance might leave you wanting for more. The Land Rover's is more adequate than ample, though the V6 remains pleasingly refined when you push it. Helping is its standard eight-speed automatic gearbox, which keeps the engine in its sweetest spot thanks to all those ratios allowing the Discovery respectable, if never shocking, pace. The Discovery isn’t a car you’ll be buying for its outright accelerative ability then, like you might some of its rivals, but it makes up for its relatively tardy performance by going places its rivals couldn’t possible dare.