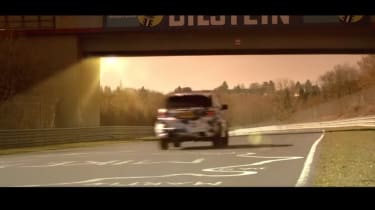 Land Rover has released a video teasing the forthcoming Range Rover Sport RS undergoing testing at the Nurburgring. Revealing little more than a hard revving V8 soundtrack and blurred camouflaged bodywork, the video at least confirms we can expect the hottest Land Rover to be a strong competitor to Porsche’s 550bhp Cayenne Turbo S.

Land Rover’s entry into the hot SUV ring will harness power from the range topping supercharged 5-litre V8 petrol engine, but in RS guise it is thought to produce around 525bhp and 501lb ft of torque – up from 510bhp and 460lb ft. This will thrust the high performance sports 4x4 from 0-62mph in about 4.8secs and onto a top speed of 165mph.

With the Range Rover Sport RS having undergone extensive testing on the ‘Green Hell,’ sightings have confirmed that a quad sports exhaust system will sit either side a large diffuser, whilst larger alloy wheels, lower suspension and a beefier braking system will give the fastest SUV to leave the Solihull Land Rover plant an aggressive exterior to match its sports car performance.

We can expect Land Rover to officially reveal the new Range Rover Sport RS in the coming weeks, ahead of sales opening towards the end of 2014. View the teaser video below.