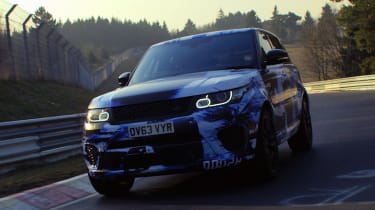 Land Rover’s 2015 Range Rover Sport SVR has lapped the Nurburgring in 8:14, making it the fastest SUV to ever circulate the famous circuit. As the first vehicle to be developed by JLR’s Special Vehicle Operations department, the Range Rover Sport SVR is also the most powerful car to bear the Land Rover badge.

With a 542bhp supercharged 5-litre V8, the new Sport SVR is expected to accelerate from 0-62mph in under 5.0secs. Having undergone extensive testing on the ‘Green Hell’, the high performance SUV will likely possess handling characteristics that are able to compete with Porsche’s class leading performance SUV, the Cayenne Turbo.

Emphasising the threat the new Land Rover poses to Porsche’s SUV, is the fact the SVR lapped the Nordschleife almost 20secs faster than the last Cayenne to complete a lap. It also places the Land Rover on the timesheets in close contention to proper sports cars like Dodge’s Viper SRT-10 Roadster and Mercedes’ SL65 AMG.

Mike Cross, Chief Engineer Vehicle Integrity, said ‘the Nürburgring is a benchmark for vehicle development and testing, and cars become stronger, more durable and faster over its 13 miles and 70-plus corners. We wanted to see whether an SUV could behave like a performance car in this challenging environment.’