Air springs and some other chassis hardware attempt to keep the mass under control, but physics don’t lie 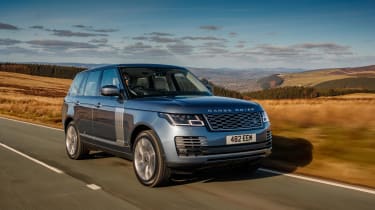 As alluded to previously, when you need to get somewhere in a hurry, the Range Rover probably isn’t the car to take. At well over two tons, it’s not just the outright weight figure that makes its presence felt, but where in the chassis it sits. While a low centre of gravity is of key importance in performance cars, the Range Rover’s 800mm wading depth was a more pressing deliverable, which keeps much of the chassis hardware high enough to ford, rather than forge.

As a result, drive a Range Rover quickly and it barely controls its mass as the all-season tyres beg for mercy and the weight flows between each corner with not that much in the way of finesse. It is far better than it once was though, helped by the standard fitment of electronically controlled and cross-linked air suspension with automatic self-levelling, while Land Rover’s Adaptive Dynamics helps reduce body roll in the bends by monitoring vehicle movements 500 times a second. 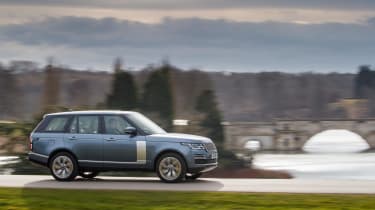 That air suspension provides a beautifully composed and controlled ride – with a few exceptions – as only sharper ridges upset its otherwise fine quality. The electric power-assisted steering has convincing weighting too, and, while there’s nothing in the way of real feel, the Range Rover can be placed with genuine confidence.

All that allows the Range Rover to provide a drive that, despite its famed ‘command’ driving position, is able to rival those of its luxury saloon competition on the road. Inevitably, in extreme driving situations it’ll be out of its depth due to its mass before an S-class or 7-series will be, but in the real world the Range Rover competes on a level playing field – and demolishes such rivals on ploughed fields…