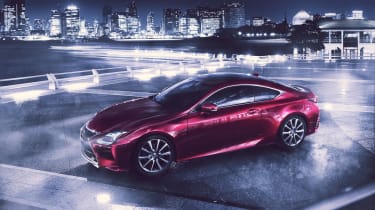 Lexus will soon take on the BMW 4-Series and upcoming Mercedes-Benz C-Class coupe with a new turbocharged version of its RC coupe, badged RC 200t.

With a 2.0-litre turbocharged engine, recently introduced in the NX crossover, the RC is set to compete with the BMW 428i and Audi’s A5 2.0 TFSI.

No current Lexus is available with a manual transmission, so you may not be surprised to learn that there are no plans to change that for the RC. Instead, the sole transmission will be an eight-speed automatic, with power sent through the rear wheels.

The RC body style is currently available only in RC F form – equipped with a 4969cc, 470bhp V8 and taking aim at the BMW M4 and Audi RS5.

While the turbocharged car’s suspension setup is likely to be different from the hardcore RC F, it’s likely to share its sophisticated double-wishbones at the front and multilink rear end. It should also shed some weight from the F’s portly 1765kg mass.

It’s difficult to make out any specific styling differences between the RC 200t and the RC F from Lexus’ solitary teaser image, but the company does appear to have applied class where in the F it might have used aggression. The polished wheels appear a little less prominent, the grille features slats rather than a mesh, and the bonnet lacks the F’s belligerent bulge.

No further details are provided, but with the Frankfurt motor show on the horizon – a likely launch venue – we’re sure to find out more in the next month.