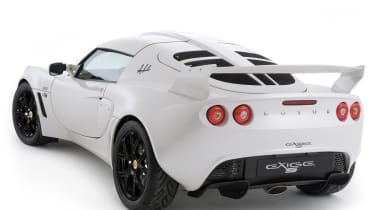 Want to know what Lotus did after the Evora? Us too. Now we have a few clues in the shape of a press release that hints at an all-new model to be unveiled at the Paris Motorshow this September. Thursday 30th September at 3.45pm UK time if you want to be exact.

No word on what Lotus might be pulling the wraps off yet, but speculation has long surrounded the resurrection of a mid-engined supercar to rival the likes of the Ferrari 458. It could simply be a supercharged Evora, but given how much notice Lotus has given us, we’d guess it’s something more noteworthy than that.

But that’s unrelated to the cars featured in the pictures here. These are the RGB special edition versions of the Elise and Exige, set for release this September. For RGB read Roger Becker, Lotus’ former Director of Vehicle Engineering who retired back in January, but was, in the words of chief commercial officer Andreas Prillmann, ‘instrumental in the development of so many Lotus cars’.

Available in four colours (white, black, yellow and grey), the RGB will be based on the 257bhp 1.8-litre supercharged version of the Exige S and the 217bhp Elise SC. Each car will also feature a numbered interior plaque, carry Becker’s signature and be highly equipped with lightweight forged wheels, the Sport pack and Touring pack.

In addition the Exige has a 30 per cent stiffer rear subframe and now delivers 42kg of downforce at 100mph.

The Elise RGB costs £38,550, and the Exige £41,950. These cars will also be the swansong for the 1.8-litre Toyota unit which no longer meets the Euro 5 type approval regulations. The engine will still be produced for markets outside of Europe.

Read our test of the 2011 model year Elise with the new 1.6-litre Toyota engine

Read our review of the Exige 260 Cup