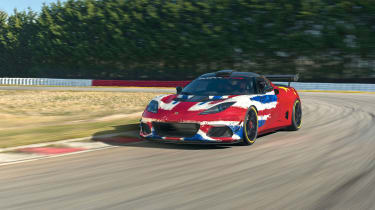 Alongside a preview of its electric hypercar future, Lotus has also revealed a concept version of an Evora-based GT4 racer which the brand hopes to race in 2020. Like all GT4 racers, the Evora GT4 Concept borrows the same basic structure and powertrain from a road-going model, and in this case, it’s the Evora GT430.

As a result, the GT4 Concept is underpinned by an extruded aluminium structure wrapped in subtly revised carbonfibre panels designed to improve cooling, and increase downforce. The rear quarter panels for instance now have larger NACA-style ducts to cool the rear brakes, while front-mounted canards and a larger stacked rear wing increase overall downforce. There is also a new carbon roof, and roof-mounted snorkel, helping the supercharged 3.5-litre V6 engine breathe.

Inside, the stripped-out cabin is typically like that of any other race car, with an eight-point T45 roll-cage, six-point FIA HANS-approved harnesses, racing bucket seats, electrical kill switch and a fire extinguisher. The instrumentation has also been replaced with a new 6-inch TFT screen with data logging and critical issue alert. Despite the various safety upgrades the Evora GT4 Concept hits the scales at just 1200kg.

The next Evora GT4 also aims to bring more attention to China’s racing scene, with two Lotus Works drivers and a new Lotus driver training school based in China part of the manufacturer’s growth plans under its new Chinese owners, Geely.

But the Evora GT4 Concept is just the first step of Lotus’s complete revolution, which should see the British marque release an entire range of new sports and supercars underpinned by an all-new carbon chassis and suite of electrified and internal-combustion powertrains. Lotus has also announced that regardless of its new ownership, it still has the capability of sourcing powertrains from outside of the group. There are exciting times ahead in Norfolk: this GT4 Concept is just the start.