Return of the entry-level Lotus Elise, now with Toyota power. For road use this could be the best Elise to date... 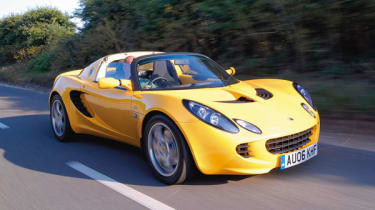 Imagine the consternation at Lotus when the long-term implications of the Chinese takeaway of Rover dawned - no more K-series. And no more K-series would mean no more entry-level Elise.

Since the arrival of the Elise S2, the base model was never a big seller, but as a way of attracting punters into the showroom, the prospect of being able to buy an Elise 'from around £24K' was much more appealing than 'with prices starting from around £28K' as they have been recently with the Toyota-engined Elise R (née 111R).

Replacing the K-series is no easy job - it's compact, light and offers good performance for its capacity - but fortunately much of the groundwork had already been done. With all the mounting and transmission issues already sorted for the 1.8-litre Toyota VVTL-i unit used in the R, it made sense to return to Toyota to power the new Elise S.

Not that the engine in the S is a detuned version of the motor from the R. In fact, it's not even the same engine, despite being nearly identical in capacity. As well as having variable valve timing and lift (hence the VVTL-i moniker), the '2ZZ' 1.8 in the Elise R also has MMC (metal matrix composite) bore liners and is built by Yamaha. The engine that goes into the Elise S is the 1ZZ, built by Toyota, and has cast iron cylinder liners, a different crankshaft, pistons and rods, and a cylinder head that provides variable valve timing, but not lift (VVT-i). It's probably best not to mention that it's essentially the same engine that powers the Corolla...

As installed in the Elise S, the 1ZZ gives 134bhp and 127lb ft; not massive outputs, yet sufficient in a car with a kerb weight of 860kg. In four of the five forward gears the Elise S has to hand (the R has six) the rev-limiter cuts in at 6800rpm, but in second gear the limit is raised slightly, reducing the all-important 0-100kph time by removing the need for another time-sapping gearchange. The 0-60mph figure is a creditable 5.8sec, and is how Lotus hopes to persuade potential buyers that the S is a serious sports car compared with possible rivals such as the MX-5 or Audi TT convertible.

Different engines they may be, but compare the power graphs of the S and the R and they trace very similar lines until 6000rpm, when the R's variable valve lift unleashes a sudden torrent of extra horsepower. So up to that point you might expect the driving experiences to be similar, especially as the torque curves also keep fairly close company. Strangely, though, that isn't the case.

Subjectively, the S seems to offer more robust performance, helped along by a slightly fruitier exhaust note. Although its torque peaks at 4200rpm, it pulls convincingly from as low as 2000rpm and gives the impression that you don't have to rev it mercilessly to obtain satisfying performance. If you've spent time in an R you'll be disappointed to reach 6000rpm and not have the engine go manic, but on the other hand, if you've experienced a regular K-series-powered Elise you'll revel in the fact that the engine still feels and sounds exuberant and well-mannered at this engine speed and that there's another 800rpm to go.

Not having to chase the extra kick provided by the R's motor is actually pretty liberating - finding a long enough stretch of tarmac to delve beyond 6000rpm to hit that hyper zone can be frustrating. Freed from this angst in the S, you can concentrate on enjoying the sublime chassis; it's like being back in an original Elise, where the pleasure in going fast in it had nothing to do with power.

Trackday fans are likely to crave the extra punch that the R gives, but for road use I'd hazard that the S is the best Elise to date.