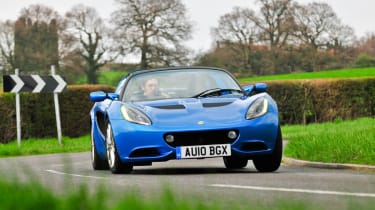 It’s a brave decision, bordering on reckless. Lotus has chosen to launch the new Elise in Surrey, which just has to be the pothole capital of the UK. To make matters worse, Leith, Holmbury and Pitch hills are all on the doorstep, and the arterial tarmac network that wriggles amongst them harbours what has to be the county’s most dastardly jolt (or what ever the collective noun is) of potholes.

But in fact the location is proving to be a masterstroke by the Lotus PR team. On Surrey’s narrow and supremely nadgety roads, weaving between trees and earthy banks, the little Lotus is sublime. Where most cars would feel oversized – even if they could handle the surface – the new Elise is utterly at home.

Of course the old Elise S would have been equally happy up here, because the new Elise shares exactly the same suspension set-up and bonded aluminium chassis as the old car. If it ain’t broke, why fix it? The styling department has been a bit busier, however. Not a lot busier, but a bit. The new nose with its one-piece light units is neater and slightly prettier, though also less aggressive, than before. Round the back, the rear bumper has been subtly restyled, the most obvious effect being to make the large diffuser look even bigger. The air intakes now have a smart aluminium mesh covering them instead of plastic grilles, and the side indicator repeaters are all new too. Even though this doesn’t add up to a drastic face-lift, it has improved the Elise’s coefficient of drag by four per cent.

It’s the engine shed at Hethel that has seen the most activity, though, because this is the first Lotus Elise ever to roll out of the factory without a 1.8-litre engine. The basic Elise now has a new 1.6-litre Toyota motor, the 1ZR unit more usually found in the Auris hatchback.

At first glance this seems even braver than the PR department’s pothole decision because the new engine appears to be a backwards step. It has to rev higher to produce the same peak power and it has less torque than the old 1.8-litre. As a result, the top speed has remained at 127mph and the claimed 0-60mph time is actually 0.2 seconds slower.

What the new engine does bring is greater fuel efficiency. The 1ZR engine has a system called Valvematic that does away with throttles controlling the amount of air let into the combustion chamber and instead works directly on the inlet valve for air-flow regulation. This gives greater control and improves economy, while Lotus also claims that it sharpens throttle response.

Of course, it’s also possible to improve fuel consumption figures through weight-saving and in this field Lotus has long been ahead of the game. At 876kg, some would still say that the Elise is actually heavier than it ought to be, but it is nonetheless 459kg lighter than a Boxster (purists will be aghast at the addition of cruise control as an option, but they’ll be mollified by the fact that it doesn’t actually add any weight).

The net result of the 1.6-litre engine and the sub-ton kerb weight is a combined fuel cycle figure of 45mpg. The extra-urban figure is 56.1mpg and Lotus is claiming that with an appropriately but not obsessively light right foot you could extract 500 miles from one fill of the Elise’s 40-litre fuel tank. Add to all this the fact that the engine is produced in the UK, at Toyota’s plant up on Deeside, instead of in Japan and you have a car with a seemingly ever-decreasing carbon footprint.

Now, some of you will be thinking that all this talk of miles-to-tanks and efficiency sounds horribly worthy and exactly what a first drive of an Elise shouldn’t be about. I thought the same in the press conference. But then it dawned on me that this car might actually be really rather important. If the engine works well, sounds good and propels the Elise with near-as-dammit the same performance as the old engine, but does so whilst delivering Green-pleasing figures such as 149g CO2 per km, then we have a guilt-free sports car. This could be the Holy Grail for manufacturers like Lotus.

It doesn’t take long out in the hills to realise that the engine is certainly good enough. It’s so quiet below 4000rpm that it’s almost like driving a Tesla, but as it starts keening for the 6800rpm limiter it suddenly seems to find a voice. And slightly surprisingly it’s the voice of a K-series – there’s exactly the same hollow rortiness to the sound, and it’s fantastic.

You undoubtedly need to be in this upper band of revs to extract the new, less torquey engine’s full performance, but if you want to potter along the lanes then there’s enough torque at low revs to do so comfortably. It’s incredibly smooth, too. I would, however, spec the optional sports exhaust to add a little aural sparkle lower down.

A six-speed gearbox is another new addition to the most basic Elise, although second and third are all that are really required today. As ever in the Elise, it’s not the tightest action and the gearstick somehow feels longer than it really is, but you can move accurately enough around the gate and it’s a fast shift so you can belt up and down the ratios.

Of course the ultimate test of the new engine and gearbox is whether they still allow the chassis to shine. And they do. The Elise is one of the very few cars in the world that you could drive along these cratered corridors with a smile rather than a wince on your face. It seems to skim over the surface of broken tarmac and it has that rare ability to involve you at whatever speed you’re travelling.

Enter a corner quickly and you have feelsome, unassisted steering gently working in your hands, a brake pedal with so much progression and feel that it seems almost like second nature to use it to trim a line whilst the chassis is loaded, and suspension that is always working but always inspiring confidence as it feeds back information. As always, there’s a purity to the Elise experience. The difference is that the purity now includes – on a number of levels – the new engine.