It might seem like a bargain, but what do you really need to know about buying a used Lotus Evora? Step this way... 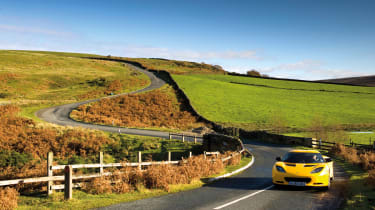 The good news – and no real surprise –  is that the Evora’s Toyota-sourced V6 is proving robust and reliable. Our guides here are Jamie Matthews, Lotus sales manager at specialist Bell & Colvill, and owner and model expert Justin King, and both report no major recurring issues with the Camry-derived engine. As Justin points out, most Evoras since the Launch Editions should still be under factory warranty. Partly for that reason, few are tuned, though many owners have gone for a decat, while the Lotus sports exhaust is a popular upgrade.

Although the Toyota manual gearbox itself is almost entirely trouble-free, gear linkage cables are a known problem area, and there can be big differences in feel from car to car, so it’s worth trying a few. Vague, loose shifts on early cars were often replaced under warranty, though some replacements later became stiff and obstructive. Adjustments can be made to improve the shift, but it’s a costly job as it involves removing parts of the interior, so it’s vital to check thoroughly on a test drive. The IPS (Intelligent Precision Shift) automatic clearly avoids these problems, although as it’s actually just a torque converter, it won’t match the speed and precision of the best double-clutch paddleshift ’boxes.

This is where the Evora really excels, so anything less than first-rate performance should arouse suspicion. The steering should feel precise and beautifully connected, the ride supple, and the car should pull up straight and true under braking. Out of kilter geometry has a considerable effect on the way the car feels. Kerbed wheels should put you on your guard, while heavily worn edges to the tyres could point to hard track use. Rear tyres in particular are pricey – £200 a corner.

Body, interior, electrics The bonded aluminium chassis is in three parts, which means that unlike the Elise/Exige, damaged sections can be replaced. No rust issues with the composite body, but check for even panel gaps. There were a number of service bulletins on early cars, covering door handle mechanisms, air-con condensers, door-pin opening, gear-cable rattles and water ingress. Check the service record for these fixes. Inside, due to the rather awkward access, the leather sill coverings, door speakers and dash bottom can all get scuffed. The seat leather on pre-MY12 cars is of poor quality and prone to wear.

‘From the moment its wheels start turning, the signs are that it’s something really rather special. Even before I reach the end of the hotel driveway, the quality of its steering and damping have made an impression.

‘I was worried that the Evora might feel wheezy, sluggish and tail-heavy. Not a bit of it. A few miles up the road, right foot stretched and steering and brakes exercised, it’s looking more and more like Lotus has created a truly remarkable car.

‘Yes, there’s that smooth, gutsy V6 behind, yet dynamically the Evora feels light and responsive like an Elise. It’s some trick to pull off, endowing the car with the urge and silky soundtrack of a 3.5-litre V6 but mounting it and tuning the chassis in such a way that its mass appears no greater than that of a four-cylinder.

‘Lotus has taken everything that’s good about an Elise – the clarity of steering, the supple ride and the effortless agility and precision – and allowed them to headline in a bigger, higher-quality package… the Evora is irresistible.’ (evo 132)

Servicing (Prices for Evora manual, from Bell & Colvill, including VAT. NB: discounts given to customers who purchase their Evora through Bell & Colvill)

Very few Evoras have yet dropped below the £30k mark – the only one we found was extremely high mileage. So £30k is generally the starting point for a 2010 car with average mileage – 2009 cars are rare and were also fully specced. Speaking of which, the Tech, Sports and Premium packs all add £s, as do rear seats. Supercharged S versions start at around £37k.