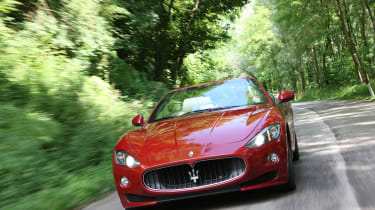 A new, 'sportier' version of the Maserati GranCabrio boasting more power, quicker gear changes and revised suspension. The GranCabrio is already Maserati's biggest selling model, so this is an important new model for the company.

The 4.7-litre V8 engine is fundamentally the same as in the regular GranCabrio but internal tweaks including a new coating for the crank and valve gear, have reduced frictional losses. Together with a revised oil pump, these have liberated an extra 10bhp and helped improve fuel consumption by a claimed 6%.

Surprisingly, the GranCabrio Sport retains the 6-speed ZF automatic gearbox of the standard GranCabrio (rather than the company's 6-speed automated manual transaxle transmission) but the gear change times have been halved (down from 400ms to 200ms) and there's an aggressive blip of the throttle each time you change down a gear in 'sport' mode.

Maserati have also tweaked their Skyhook damper setup, increased spring rates by 15% and roll stiffness by 20%. Finally, the brakes have been improved with redesigned discs and different pad material.

A big improvement over the regular GranCabrio. Firstly, the car rides much better than you expect it to, the new dampers keep the body under tighter control and, despite the increased spring rate, ride quality is now probably best in class.

But what makes this car special is revealed the moment you press the 'sport' button which reveals a completely different character to the car. The throttle sharpens, the gear changes get quicker, the damping tightens, twin butterfly valves in the exhaust open and you're serenaded by one of the greatest exhaust notes in the world today.

If you're in the mood, you'll love it - but if you want to quieten things down again, pressing the sport button reverts the GranCabrio into a relaxed schlepper again, something this car does surprisingly well. The 1990kg kerb weight is partly to blame here, blunting acceleration and reinforcing this cruiser feel.

The revised brakes are better than before but still don't instil confidence on first acquaintance thanks to a slightly dead feel under foot and more pedal travel than you really want in a car as sporting as this.

This is where it gets tricky, as it's hard to know what to compare this car to. The new 6-Series might seem like a natural competitor but it's less money and nothing like as characterful. In fact, the GranCabrio Sport blows it away by having greater interior space, far more driver appeal and an engine you'll fall in love with.

Perhaps it's fairer to compare it to cars like the Bentley GTC or Aston DB9 Convertible, but both of these rivals are nearly 50% more expensive, yet hardly add anything to the ownership experience in return for the greater outlay.

Cars won't start arriving in the UK until October, with just 30 examples due in UK by the end of 2011 and despite the £102,615 list price, Maserati expect them all to be sold before they arrive.