The GranCabrio MC is the seventh iteration of the gorgeous Maserati GranTurismo. Can it match the cheaper Jaguar F-type Roadster? 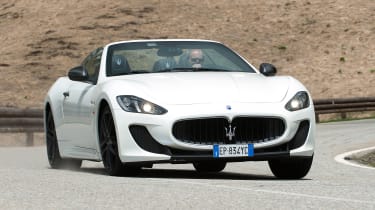 The Maserati GranCabrio MC. The 4.7-litre V8-engined cabriolet is, believe it or not, the seventh iteration of the undeniably handsome GranTurismo coupe launched in 2007, the model generally regarded as a game-changer for Maserati. There are three Maserati GranCabrios to choose from: the original 434bhp model launched in 2010 (now £98,000), the £104k, 444bhp Sport, and this MC, with 454bhp and a price tag of £111,710.

It restores symmetry to the company’s sports car line-up by adopting the more aggressive ‘Maserati Corse’ aesthetic trimmings, additional power and ‘track-honed’ bits and bobs of the top-tier GranTurismo MC Stradale coupe, itself a domesticated version of Maserati’s Trofeo and GT4 racers. And, of course, it retains the regular GranCabrio’s back seats. This would have made it the first MC-badged car capable of carrying four people, had it not been for the reintroduction of rear pews in the MC Stradale coupe after pressure from customers.

The MC’s body control, structural integrity and generally responsive dynamic demeanour may come as a pleasant surprise to anyone who’s driven the original 2010 GranCabrio with its fussy adaptive dampers and rather wobbly body.

Suspension damping duties shift from adaptive to well-calibrated single-rate passive, further sharpening the sporting focus, and while the 10bhp hike over the GranCabrio Sport might be modest, it’s massaged by a louder, ruder sports exhaust. The V8’s sonic repertoire is endlessly enjoyable and goes all the way from a woofling whisper to a belligerent bellow with varied ballistic stylings on the overrun.

If maximum-attack acceleration doesn’t quite peel the moisture from your eyeballs, the MC does feel effortlessly rapid, the swift and slick ministration of the ZF auto making the most of the big, naturally aspirated V8’s broad powerband and healthy appetite for revs.

So the GranCabrio MC does sound and fury in some style, with only mild buffeting in the cabin at speed, but motor up the hood, switch out of Sport mode, hit the autostrada and everything calms down to a genuinely relaxing degree, with only the faintest rustle of wind noise from the fabric top. You can really pack away the miles in this car.

Over £30,000 less buys the £79,985, 488bhp Jaguar F-type V8 S, an extremely exciting and sonorous sports car though two seats down on the Maserati, while the dynamic benchmark surely remains the Porsche 911 Cabriolet, which starts at £83,448 in 394bhp Carrera S trim. Though it’s significantly down on glamour in this company…

The bracing bars in the boot, necessary to beef up the bodyshell’s rigidity, take up what could be a few extra inches of interior. Rear headroom is pretty tight if you put the roof up, and the motorised folding mechanism takes a fair old while by the latest standards.