Maserati has launched the new GranTurismo Sport at Geneva, with a 453bhp engine 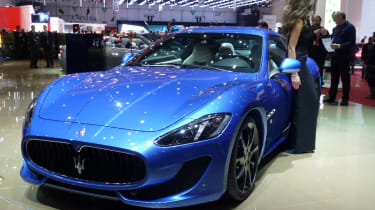 Maserati's new GranTurismo Sport has been launched at the Geneva motor show - a new model designed to replace the outgoing GranTurismo S.

The engine is a development of the fabulously vocal 4.7-litre V8 already found in the current 'S', with peak power rising from 433bhp to 454bhp. This same engine will also be used in the hardcore MC Stradale GranTurismo.

It will be available with two gearboxes, a six-speed ZF automatic or a six-speed electro-actuated 'box, with dry twin-plate clutch (Although this won't be available in North America). European LHD markets will get the first cars, which are expected to go on sale in June with the incoming MY2013 GranTurismo.

When fitted with the electro actuated gearbox, the faster shift times (down to 100ms) and increase in power enable the GranTurismo Sport to accelerate from 0-62mph in just 4.7 seconds, reaching a top speed of 186mph. The fully-automatic version isn't far behind, and with new MC Auto Shift management software, can achieve a top speed of 185mph, hitting 62mph in 4.8 seconds.

The suspension has been tweaked but not changed substantially, now using an updated version of the Sport Skyhook system previously fitted to the GranTurismo S and Quattroporte models. The system offers a Sport mode which sharpens the car up, while normal mode allows for more comfortable cruising.

In addition to the mechanical changes, 'Sport' models will feature a revised front bumper design said to improve both engine and brake cooling without increasing drag - but, to our eyes at least, does little to improve the looks of the car itself. Other changes on the ‘Sport’ include a new steering wheel design, better front seats, new front LED running lights and lightly smoked taillights.