Maserati has a rival for the new Porsche 911 GT3 up its sleeve - a mid-engined, V8-powered GranSport supercar 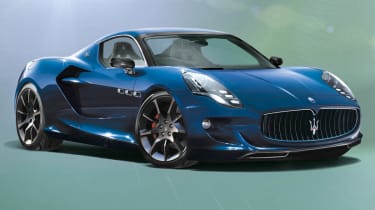 Maserati is planning to launch an extreme sports car with a mid-mounted V8 engine. Likely to appear in 2015 carrying the GranSport name, the new model is set to bring a new level of performance to the Italian brand.

In an exclusive interview with evo, Maserati boss Harold Wester said he wanted the car to be 'the most pure expression of Maserati sportiness possible'. And the inspiration – from both a technical and a marketing point of view – is clear. 'Imagine having something like the Alfa Romeo 4C but for Maserati,' said Wester. 'It would have a carbonfibre monocoque and a mid-engined layout, just like the Alfa 4C, as this gives the stylists the most freedom to design something really stunning.'

Wester is CEO of both Maserati and Alfa Romeo, and following the overwhelmingly positive reaction to the 4C since it was first shown at the 2011 Geneva motor show, he now clearly wants to bring some of the same magic to Maserati. The company is already committed to launching a new Quattroporte, a smaller saloon and the production version of the Kubang SUV concept over the next few years, and the new mid-engined car would be a halo model for the whole range, with Wester already calling it 'the new GranSport'. (The GranSport name was last used on a high-performance version of the Maserati Coupe between 2004 and 2007, review here.)

As our artist's rendering shows, the new car would be considerably bigger than the Alfa 4C. That’s because, as Wester confirmed, it would be powered by Maserati's 454bhp 4.7-litre V8 (from the new GranTurismo Sport) instead of the turbocharged transverse four-cylinder unit that will power the Alfa. The V8 would be mounted longitudinally, meaning a significantly longer wheelbase would be needed, with power going to the rear wheels via a new-for-Maserati twin-clutch transmission, conceivably the seven-speed transmission that's currently used in the Ferrari 458 Italia.

Wester said the GranSport would be about 4.4 metres in length, meaning it would be nearly as long as the 458. He also hinted that Maserati would investigate the use of alternative powertrains, possibly including the next-gen turbocharged engine that we'll see in the new Quattroporte. Despite that, he said a substantially similar version of the current naturally aspirated 4.7 V8 would be ‘the perfect choice’ for this ultra-sporting Maserati, meaning a stay of execution for a unit previously thought to be on the way out.

With lightweight construction, likely to include the extensive use of carbonfibre, the GranSport would have a dry weight of around 1200kg, making it considerably lighter than its existing supercar competition (a Ferrari 458 weighs 1485kg). Wester is also determined to offer the car with a very aggressive price tag that – if delivered – would undercut many rivals.

And, if it gets the green light, the GranSport won’t just be sold in road-going guise. Maserati has traditionally run popular one-make race series for gentlemen amateurs and, with the GranTurismo set to go out of production in late 2014, the arrival of the new GranSport the following year would be perfectly timed for it to become the new star of a 'Trofeo' series.

At the moment the new car is still only a proposal – but with the enthusiastic backing of the company’s CEO, there’s an excellent chance that something very similar will make production. And if Wester is able to deliver on his price and performance promises then we should be looking at a sub-£100K car that has the 991-generation Porsche 911 GT3 as its closest rival. That makes it an enticing proposition – and a car with far more appeal to hardcore enthusiasts than the current (good but heavy) GranTurismo MC Stradale.

‘I want this new GranSport to define the sporty end of the Maserati brand,’ said Wester. ‘We have a history of building very sporty Maseratis and I’d like that to continue in the future.’