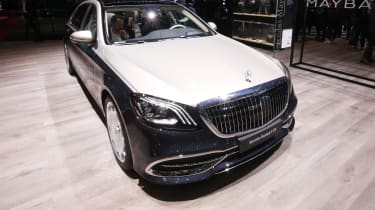 Mercedes’ most luxurious saloon, the Mercedes-Maybach S 650, has undergone a subtle nip and tuck for 2018. Due for its public debut at the 2018 Geneva motor show, the new super long wheelbase Maybach S 650 will feature new colour and trim options to help further distinguish it from the rest of the S-class range.

New for 2018 is a redesigned grille featuring densely packed vertical strakes in contrast to the horizontal units in other S-class’ and nine new two-tone paint options. Owners can also specify a double clear coat option on darker colours, the final coat applied by hand by ‘Maybach Manufaktur’, a bespoke finishing department not unlike Aston Martin’s Q department.

Finishing off the exterior changes are polished 20-inch multi-spoke wheels (also seen on the S 65 AMG) alongside two other 20-inch wheel options bespoke to the Maybach range. At a significant 200mm longer than a standard LWB S-class, the S 650 offers a massive jump in legroom, appealing to its back seat dwelling target audience. 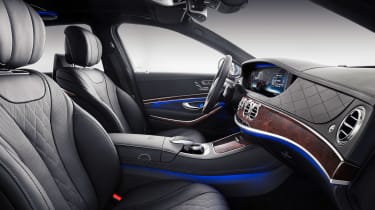 Speaking of the back seats, the Maybach S 650's opulent interior will be available with two new interior colour options and bespoke gold, copper or platinum topstitching on cars fitted with the black Maybach Exclusive nappa Black option.

In the UK the Maybach-Mercedes S 650 will only be available with Merc’s ubiquitous 621bhp twin-turbo V12 engine connected to a seven-speed automatic gearbox. In other markets a more tax-friendly 4-litre V8-powered S 560 is also available, making more sense for key markets in the Far East such as China and Singapore.

Aimed at eloquent rivals like the Rolls-Royce Ghost and Bentley’s upcoming Continental GT-based Flying Spur, the new Maybach will have a tough job attracting buyers away from its more glamorous British rivals, but in terms of outright comfort few are likely to match it.