Mercedes-Benz could be killing off its Maybach luxury car brand 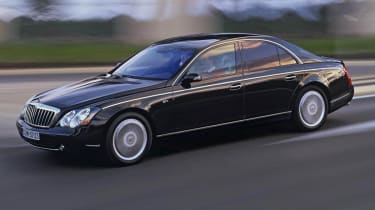 Mercedes-Benz could be about to admit defeat in the super-luxury battle by killing off Maybach. Even as the paint is still drying on Rolls-Royce’s new Ghost and Bentley’s new Mulsanne, a senior Daimler executive recently raised the possibility that its Maybach brand may be ‘abandoned’. Daimler’s Vice-President of Design, Gordon Wagener, admitted that his department had not yet been asked to sketch design ideas for a new Maybach.  ‘We have not started to design its replacement, if that’s what you are asking me,’ said Wagener. ‘That’s because we (the board) have not finally decided on how to continue that brand. We could continue with the car we have or create additional cars or even abandon that brand, but we have not made that decision.’ While rumours about Maybach’s future have circulated for months in the face of poor Daimler financial results, it is the first time a Daimler board member has brought up the possibility that it could walk away from its flagship brand.  Even if Wagener’s team were to begin sketching work tomorrow, normal design timelines would not put a replacement for the current car into production until at least early 2014. Given that the current Maybach 57 (evo review here) and the longer 62 went on sale in 2002, it’s hard to see buyers maintaining interest in the same model for 12 years – especially when its sales have suffered a serious decline since the global financial crisis. Maybach has become something of an embarrassment in Stuttgart, and has never reached the heights expected of it. The brand was revived in response to a flurry of luxury car launches from its German rivals, with Bentley falling into the Volkswagen Group’s hands and BMW taking Rolls-Royce.  Rushed into production, the Maybach was clearly a long-wheelbase version of the Mercedes-Benz S-Class, but each car took up to seven months to build and cost around three times as much money. The twin-turbo V12 limo arrived with two wheelbases, but its sales have never risen to sustainable levels and it is widely considered to be such a disaster that it’s not even considered a rival by Rolls-Royce for its Ghost and Phantom or Bentley for its Mulsanne. Click here to read evo’s road test of the Maybach 57S saloon Join evo on Twitter, Facebook and Youtube for news and videos