Bentley unveils the Mulsanne, set to replace the ageing Arnage in 2010 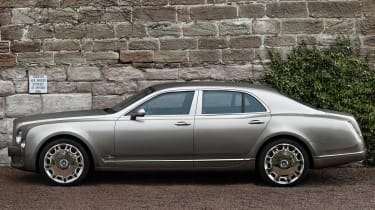 Replacing the ageing Arnage, the Mulsanne has just had its first airing at the Frankfurt motor show, and Bentley’s new flagship model is shaping up nicely.

The Mulsanne is powered by a revised version of Bentley’s 6.75-litre V8 engine, now putting out 505bhp and a staggering 752lb ft of torque from just 1800rpm.  An all-new 8-speed automatic has been drafted in to put all that power and twist down through the rear wheels.

While it won’t have the outright pace to match the ethanol-powered SuperSports, nobody could accuse the Mulsanne of being underpowered, as Bentley claims it’ll go on to around 180mph.

The new model sits on air suspension and 20in wheels as standard, although Bentley says that most customers will opt for the 21-inch alloys.  Drivers can also choose to spec a set of carbon ceramic brakes with eight-piston calipers.

Bentley is keen to establish the Mulsanne as a driver’s car, with a new Drive Dynamics Control system governing suspension and steering response.  Drivers will be able to choose from three preset modes, ‘Comfort’, ‘Sport’ and ‘Bentley’, or they can devise their own custom settings.

Click here to read the rest of evo's Frankfurt news