Harry Metcalfe is at the Rolls-Royce Ghost sports saloon launch. What's it like? 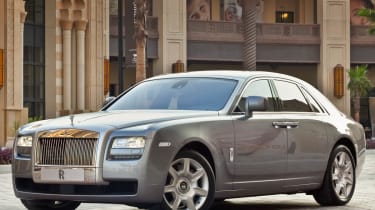 The new Rolls-Royce Ghost. It’s a properly quick car. Its 563bhp 6.6-litre V12 makes it more than capable of breaking traction when the twin turbos take hold at around 50mph. Alongside this, though, it’s the best riding car I’ve been in for years. My only issue is the continuing use of high profile run-flat tyres, which hinder the handling and limit the grip. A Bentley Continental GT would be a match on performance but because it comes with more dynamic tyres it would disappear when the roads got challenging. There’s anti-roll tech on the Ghost, but cornering shots still expose a lot of lean. It’s definitely a Rolls-Royce from the moment you open the door, with no hint of BMW 7-series (the two cars share a number of components). All the things you touch are RR. Nice touches include the lack of a sports button (you set the gearbox to ‘low’ to lock out the higher gears, while the traction control can be turned off) and the option to set the ventilation to ‘soft’. The rear seats curve round the corner like a sofa, despite actually being individual chairs. The UK price is set to be around £192,000, undercutting its bigger (and less powerful) brother, the RR Phantom, by nearly £80K. That’s some saving, but the Ghost is still £55K pricier than a more powerful Bentley Flying Spur Speed. We’ll have a more in-depth drive piece on the Rolls-Royce Ghost in Issue 140 of evo, on sale in January 2010. In the meantime, read some tech details on it here. Follow evo on Twitter for the latest fast car news