Spectacular Mazda 767B racer up for auction at Amelia Island

Not a Le Mans winner, but a vital piece of Mazda's racing heritage 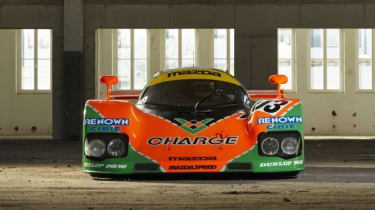 The 767B is inextricably linked to the 787B that eventually won Le Mans in 1991, and was itself a follow-up to a string of other rotary-engined cars designed to Group C regulations. Where it differed from its immediate predecessor, the 757, was in using a four-rotor 13J Wankel engine rather than a three-rotor 13G.

The new engine developed around 580bhp on its debut as the 767 in 1988, where it secured 17th and 19th-placed finishes at Le Mans, but updates to the car - creating the 767B - saw aerodynamic and structural improvements and a resulting boost in performance.

The example being sold at Amelia Island is chassis 003 and was raced to third in the GTP class and 12th overall at Le Mans in 1989, driven by Yojiro Terada, Marc Duez, and Volker Weidler. It also raced at the Fuji 1000km, achieving a place better in both GTP class and overall.

The motorsport world moves fast and by 1990 the 767B was replaced by the 787, which saw further improvements before the 787B took its famous victory in the 1991 race. 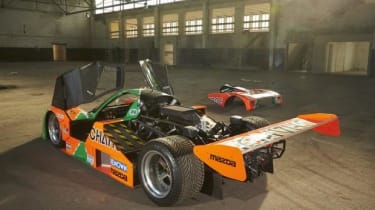 This particular 767B enjoyed factory competition up to 1991 and was subsequently bought and raced by gentleman driver Kaoru Iida in 1991 and 1992. In 2003 the car changed hands and since 2013 has been owned by the consignor, undergoing a restoration by UK-based Group C specialists Speedsport. It competed at the Spa Classic in 2014.

Chassis 003 is being sold with a comprehensive spares package, though as evo learned on a visit to Mazda’s North American heritage fleet basement, the firm’s Wankel-engined Group C cars are far from being as scary to run as some of their contemporaries. While the engines are unique among other racing cars they’ve proven tough in racing conditions and surprisingly simple to rebuild.

And of course, it features the striking orange and green livery of Japanese textile and clothing company Renown - very similar to that worn by the victorious 787B.

Listed with an estimate of $1.8-$2.4 million (around £1.5-£2 million at current exchange rates) it’s clear that Mazda’s rotary racers are becoming coveted pieces of motorsport history. It’s being sold, with reserve, by Gooding and Company at Amelia Island on March 10.