EV with Wankel range-extender to arrive in 2020 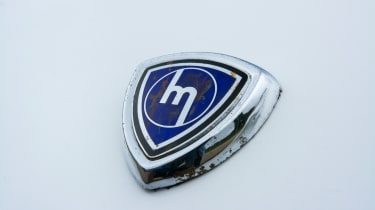 Few automotive rumours have persisted like the one concerning the return of the rotary engine, and Mazda has now confirmed its future plans for the unique design – although they’re not quite what some might have expected. The Japanese company has revealed that it will launch its first electric vehicles in 2020. One will be a pure battery-electric vehicle, while the other will use a small Wankel rotary range-extender.

While a battery-electric model is something of a given in the modern market, Mazda’s reintroduction of a rotary-powered car is certainly newsworthy. No company has persisted with the design as long as Mazda, which launched its first rotary-powered production car back in 1967, and produced its most recent in 2012.

However, the design has proved problematic throughout its lifecycle as a primary power source, with high fuel and oil consumption, and limited life of rotor-tip seals ultimately limiting its uses and appeal.

Rotary engines do have several advantages over conventional reciprocating piston engines, though, and it’s these that could make it the ideal solution as a range-extending engine. Primarily, they’re smaller and lighter than other combustion engines for a given output, and with rotating rather than reciprocating internals, considerably smoother too. 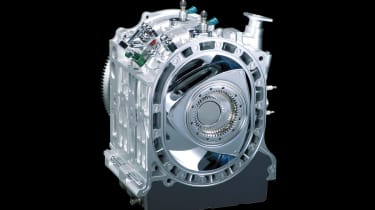 The idea of a rotary range extender isn’t new – back in 2010, Audi created the A1 e-tron prototype, an Audi A1 with an electric drivetrain backed up by a 245cc rotary engine hidden beneath the boot floor. While it never made it beyond the prototype stage, the e-tron had all the benefits of a small electric car but with the reassurance of extra range.

Mazda says its rotary range extender will be ‘small, lightweight and exceptionally quiet’, while its size gives engineers options as far as the packaging of different electric drivetrains is concerned. 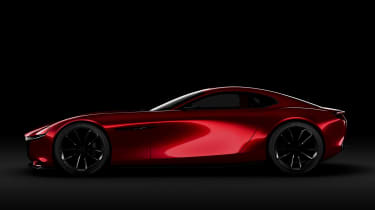 Details are otherwise slim at this stage – and Mazda hasn’t yet announced which vehicle the powertrains will arrive in, so the stunning RX-Vision from the 2015 Tokyo motor show is still unconfirmed – but the company says its engine will be designed to run on LPG as well as conventional gasoline, and could serve as a back-up power source in case of emergencies.

While some of the design’s limitations are a problem in regular vehicles, they may not be so much of an issue in a range-extending application. Range extenders tend to have a fairly well-defined usage pattern, without the variability of regular engines – think constant revs and load rather than varying engine speeds and loads. This, in turn, means the engine can be optimised for its range-extending purpose, without the same fuel, oil and component wear seen up until now. 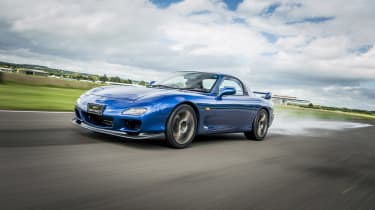 The decision from Mazda to offer electric models does seem unusual given its recent claims its new Skyactiv X combustion technology is equal to an electric powertrain in terms of well-to-wheel emissions, but the company now seems keen on improving the life-cycle emissions of all its vehicles through fuel technology, including the aforementioned LPG, CNG, hydrogen and biofuels. The company is already researching algae-based biofuels alongside the Tokyo Institute of Technology and Hiroshima University.

All this research is taking place under Mazda’s ‘Sustainable Zoom-Zoom 2030’ future technology plan. Perhaps best of all for people like us is that Mazda is keen to pair its more sustainable future plans with a commitment to continue making cars that are fun to drive.