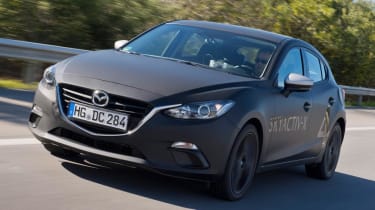 Mazda might be a minnow in global automotive terms, but the independent Japanese car maker could also be the company to save the internal combustion engine long after other mainstream brands have turned to hybrids and full electric vehicles.

And this prototype is the latest step down that particular road. Using a technology called spark controlled compression ignition, or SPCCI, Mazda claims it will offer significant real-world gains in terms of efficiency, cleanliness and performance over the company’s existing Skyactiv petrol and diesel powerplants.

Mazda isn’t hedging its bets on electric power just yet, believing that until the worldwide electrical grid is predominantly powered by renewable energy, an electric vehicle’s tailpipe emissions are too far offset by the dirtiness and high CO2 values of the fossil-fuelled coal, oil, and gas power plants that supply their electricity. 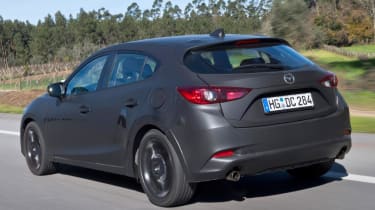 The logical answer to this is to significantly improve the technology behind existing combustion engines, which rely less on the electrical grid, well-to-wheels, than their plug-in counterparts. If the gains are large enough, says Mazda, you can match or better the average EV in terms of greenhouse gas emissions.

SPCCI does this by combining the most advanced and optimised technologies from petrol and diesel engines with the best driving characteristics of both at the same time.

Compression ignition – as used in diesel vehicles – has been tried in petrol cars before at the prototype stage, but controlling the point at which the fuel-efficient lean mixture burns spontaneously under heat and compression has proved difficult. It’s effective in only a narrow window of loads and engine speeds, necessitating spark ignition at other times – and switching between spark and compression ignition has proved complicated and expensive.

Mazda’s SPCCI technology avoids the need to switch quite cleverly. Its spark plugs fire during every ignition phase of the four-stroke combustion cycle, but do so in different conditions depending on the driving requirements.

Most of the time, the Skyactiv-X engine operates under compression ignition. During induction, the injector fires a lean fuel mist into the combustion chamber as a belt-driven supercharger pushes air into the mix. During the compression phase, the injector fires again with a small but slightly richer mixture around the spark plug. As the piston reaches top dead centre the plug ignites this richer mixture, the expansion of which raises pressure in the combustion chamber – enough to simultaneously ignite the lean mixture around it with compression alone.

The use of the spark plug means compression ignition can be timed, and means with simple timing adjustments and by injecting a leaner or richer mixture, the transition between spark and compression ignition cycles can be constantly varied. No switching, very little complication, and the ideal ignition for a given driving scenario. The engine operates in SPCCI mode the majority of the time, can switch into an ultra-lean burn mode during low revs and low load cruising (which, because of controlled, lower combustion temperatures, doesn’t produce high levels of NOx like previous lean burn engines), and graduates to regular spark ignition under high load and high revs. 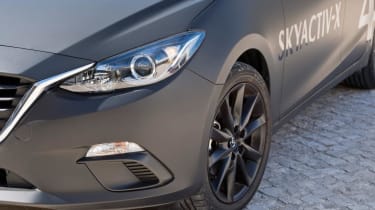 When driving Mazda’s prototype, which packs the next-generation engine, chassis tweaks and newly-designed seats into the shell of the existing Mazda 3, the only clue that the engine is varying between these modes is the flashing of coloured circles in the roughly attached tablet computer on the dashboard.

It really is imperceptible, even on this early prototype – a production version won’t be ready until 2019. The engine seems to run in SPCCI the majority of the time, giving a very wide window of efficiency in normal driving – Mazda says it’s as fuel-efficient as its current range of Skyactiv-D diesel engines.

On a light throttle, cruising through villages or bobbing along at 50mph, the orb depicting lean burn stays on the screen for extended periods, while harder acceleration sees the lean burn and SPCCI bubbles disappear, with only the spark indicator remaining on screen.

> Click here for our review of the Mazda MX-5 BBR

Most impressively, the Skyactiv-X feels better to use than most equivalent production 2-litre engines. It’s smoother, more linear and more refined throughout its rev range than Mazda’s current Skyactiv-G petrol, pulls cleanly from tickover in high gears if required, and doesn’t have a hint of diesel-style rattle. Nor does it have a diesel-style wait-surge-gearchange driving style – owing to the supercharging method of induction, it’s much more linear than any diesel, feeling more like a naturally aspirated engine – just one with a little more urge than you’d expect.

The engine doesn’t yet feel particularly 'sporty', but that’s not yet a priority for Mazda, which is still refining the technology and eliminating bugs. Its current priorities are reliability, tractability and refinement, and the engine seems good for all those targets, so it’s not hard to imagine more power (the prototype feels brisk, but the average 2-litre hot hatch would outpace it comfortably) and a more rousing soundtrack coming later. There’s some hesitancy in the mid-range, but it’s fair to assume this will be ironed out for production. 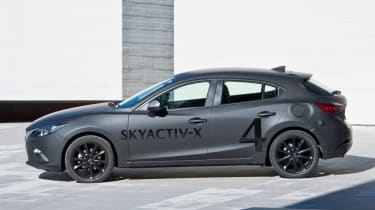 But the future of the technology is exciting. One slide of Mazda’s presentation caught our eye in particular: because the engine’s window of efficient running is so much larger than existing engines and because of the engine’s refinement, there’s effectively no penalty for running a shorter final drive ratio in the transmission, for closely-stacked gear ratios and quicker acceleration – the days of yawning diesel-style ratios may be coming to an end.

There are other things to like about Mazda’s prototype too. Refinement even beyond the engine is very good, with Mazda using a very stiff structure with damping nodes to cut down on resonance – even on rough roads, the prototype felt noticeably more solid than the regular Mazda 3 along for comparison. It rode better too thanks to redesigned suspension and Mazda’s choice of running softer sidewall tyres to better absorb high-frequency bumps. Combined with the new seats, designed to keep the pelvis in a more natural, upright position, the prototype felt far more serene and pliant than its production counterpart, but lost nothing in terms of road feel (if anything, the slightly weightier steering was an improvement) or useful interaction.

We’re expecting the next-generation Mazda 3, based on last year’s Mazda Kai concept, to make its debut some time during 2019, and it’ll debut the Skyactiv-X engine when it does. If you’re interested in the future of combustion vehicles, it’ll be one to watch very closely indeed.