Mazda’s underrated hatchback is due for a total overhaul 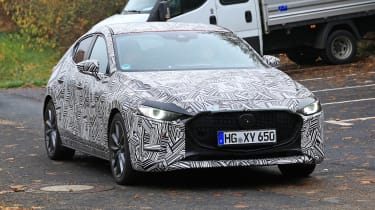 The next Mazda 3 has been spotted undergoing final testing before its public reveal at the LA motor show later this year. The Mazda 3 has always been an underrated hatch in evo’s book, combining sharp dynamics and styling with perky, if not particularly brisk engines. Unfortunately, its relative niche status, not to mention hatchback juggernauts like the Golf and Focus seem to have kept it off the mainstream radar in the UK. This new model is hoping to change that.

Inspired the Kai Concept, which made its debut at the 2017 Tokyo motor show, the new Mazda 3 looks to closely match the Kai’s bulbous hatchback shape, with a low and sleek glasshouse and long bonnet. Peeking out from the 3’s low snout are a pair of slim LED headlights and the same large, sculpted grille seen on the concept.

Under the bonnet will sit Mazda’s next generation of petrol Skyactiv-X engines, which combine both compression and spark ignition in the one engine to get the best of both worlds in terms of performance, refinement and efficiency. As we went into further detail in a prototype model driven earlier in the year, the engine will not switch between the two forms, instead it will bleed between the two forms of ignition depending on load and revs.

Refinement has also been a key priority for Mazda in its next generation 3, a common cause of complaint in the current model. To approach this, Mazda has made a concerted effort to increase structural rigidity, with damping nodes built into the chassis to absorb unwanted road noise and resonance.

The interior will also be a big step up for Mazda, integrating a new infotainment system into a fresh dashboard architecture, which also takes cues from the Kai Concept. The new, more driver-focused interior not only hopes to compete with Volkswagen in terms of quality, but should also finally compete on integrated tech and refinement too.

Although a reboot of the hot Mazda 3 MPS is still off the cards, the next Mazda 3 will showcase the Japanese marque’s approach to the potential of the internal combustion engine before electrification inevitably takes the lead in the future. For now though, the Golf and Focus might have to look over their shoulders, as the Mazda 3 looks like it might finally present a real challenge to the status quo.