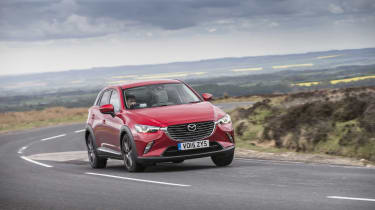 Quickest of the CX-3s is the 2-litre petrol in all-wheel drive format, which will find its way to 62mph in 8.7 seconds and eventually nudge 124mph.

The automatic-equipped front-drive petrol model lags behind both with a 9.9-second dash and 116mph top speed.  Of the diesels, it’s the heavier all-wheel drive automatic car that’s slowest, reaching 62mph in 11.9 seconds to the manual AWD’s 10.5sec and the front-drive manual’s 10.1. Both AWD models hit 107mph, 3mph slower than the front-driver.

In other words, no CX-3 will thrill on its performance alone – a similarly-sized Juke Nismo RS will cover the 0-62mph sprint in 7-seconds flat and hit 137mph – but nor do the Mazda’s figures differ greatly from the class norm. As we’ll cover later, it’s also competitive in terms of economy.