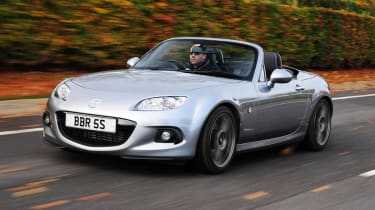 Tuner BBR has produced a rival for the Mazda MX-5 GT. BBR is no stranger to making go-faster MX-5s, with supercharged models in its recent history, but this new GT270 iteration differs by utilising turbocharging.

It sees the MX-5 2.0i Sport Tech’s muscle raised from 158bhp and 139lb ft to 268bhp and 227lb ft, that bulkier bhp figure produced 350rpm later than the standard peak. The power gains yield a notable drop in 0-60 time, from a standard 7.6sec to an Audi S5-matching 4.9sec, while the top speed is electronically limited to 150mph, representing an 18mph rise.

As well as peak performance boosts, BBR boasts of much better driveability than the naturally aspirated Sport Tech, with more than 200lb ft of torque available between 3000 and 7000rpm. Refinement is said to be improved too, with an exhaust note quieter than the standard MX-5’s at cruising speeds.

Other tweaks include the addition of launch control and a heel-and-toe mimicking throttle blipper on downchanges of the six-speed manual gearbox. The cruise control stalk also toggles between different engine maps, intended as road, track, economy and limited-rev valet modes.

At 1190kg, the BBR GT270 weighs 58kg less than a comparable MX-5 Sport Tech Roadster Coupe. Priced at £29,995, the GT270 is limited to 100 units. It costs £6900 more than standard, though crucially it is identically priced to the much less potent (and naturally aspirated) 203bhp Mazda MX-5 GT, an officially sanctioned special edition developed by Jota.

Other options for the GT270 include a suspension upgrade, a Yellow Stuff brake upgrade and a stainless steel sports exhaust system. Described as trackday noise limit compliant, it hikes power and torque up further, to 302bhp and 254lb ft respectively.