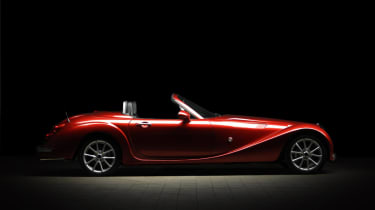 You might not be familiar with Mitsuoka. If you are, the chances are that you’ve seen an example of the ‘Viewt’ – a reinterpretation of the classic Jaguar MkII on the less-than-auspicious chassis of an old Nissan Micra.

Until now Mitsuoka’s products have been exclusively grey-import only, but from mid June you’ll be able to walk into a UK showroom and put down your order for the Roadster.

Known as the Himiko in Japan, it is, at a glance, reminiscent of Morgan’s Aero range – though there the similarities end. While the new Aero 8 sits on an aluminium chassis and utilises a brawny BMW V8, the Mitsuoka Roadster has the humble underpinnings of a third-generation MX-5.

The benefits are that Mitsuoka’s retro Roadster inherits the nimble chassis, revvy engine and mechanical integrity of the evergreen Japanese sports car. Power comes from a 2.0-litre, four-cylinder petrol engine and like the Mazda, offers a six-speed manual or six-speed Powershift automatic with wheel-mounted paddles.

The car also retains Mazda’s power-retractable hard top, which transforms the Roadster from coupe to convertible in twelve seconds.

Where the Roadster differs from the Mazda is in the styling – though the keen-eyed will spot the unchanged doors and windscreen surround (and much of the interior). Mitsuoka has also significantly extended the wheelbase and bodywork – the Roadster is 580mm longer than an MX-5 and its wheelbase a full 700mm greater. At 1280kg in its Japanese specification, it’s also piled on 107kg compared to a regular 2.0-litre MX-5.

Befitting the car’s luxury billing – if not completely justifying a hefty £53,800 price tag – the Mitsuoka also has heated leather seats, automatic climate control, and the same safety and security features as its donor, including ABS, stability control and traction control.

The car will be sold in the UK by T W White & Sons through its showrooms in Surrey, South London and Kent. Jen White, Mitsuoka project manager at the firm, says they believe the Roadster can ‘make a real impression on those that want exclusive luxury’.