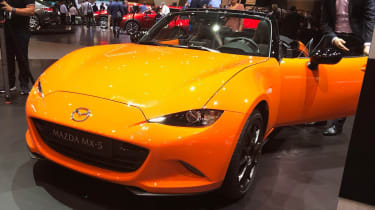 The Mazda MX-5 has been on sale for 30 years in 2019, so to celebrate Mazda has created a 30th Anniversary edition with a suite of bespoke features and detailing. Launched in Europe at the 2019 Geneva motor show, the MX-5 30th Anniversary is limited to 3000 units worldwide, exclusively with the new 2-litre engine.

Split between soft-top and hard-top RF models, it also features a distinctive Racing Orange colour scheme which is meant to represent the breaking of a new dawn, but also makes pleasing reference to the shade made famous on the iconic 787B Le Mans-winning racer.

The special edition is only available with the top-spec 181bhp 2-litre four-cylinder engine and the standard whip-snap six-speed manual transmission, which is no bad thing, as the new unit is a properly sweet little engine now, revving with more verve than the 2-litre that went before. 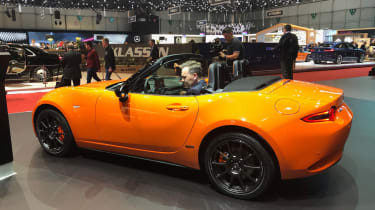 The MX-5’s chassis upgrades are more interesting, comprising a unique set of Rays ZE40 RS30 forged alloy wheels, upgraded front Brembo front and Nissin rear calipers in matching orange, and new Recaro seats. These features are on top of the upgraded Bilstein dampers already found in top-spec GT Nav Pro models in the UK – which should go some way to sharpening the MX-5’s dynamic capability.

Matching the exterior hue are some correspondingly coloured interior door panels and orange stitching on the seats, door and dash. We’re big fans of the simplicity of the MX-5’s interior too, so this subtle hand is no bad thing. The new Recaro seats are a particular highlight, and hopefully sit a little lower and with more supportive bolstering – two main gripes of the current car.

In the US these upgraded components, paintwork aside, are available in an option package on standard MX-5s, something the UK market has so far been denied – let’s hope that changes soon. For the moment, let’s just celebrate that the MX-5 is still around, and is better than ever some 30 years later after its initial launch.

Mazda will bring 600 units to the UK – 400 roadsters and 200 RFs at £28,095 and £29,895 respectively. In keeping with MX-5 tradition, we suspect this special edition will become quite sought after, as the US allocation has already proved, selling out its 500-car run in just four hours.