A standard 720S Spider a little undramatic for you? Supercar tuner Novitec has a solution for you 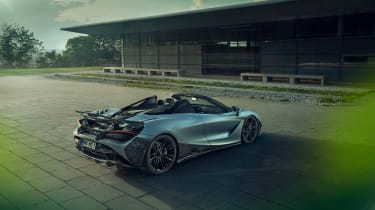 The McLaren 720S is an outstanding performer in both coupe and drop-top forms, its sheer straight line speed often makes us question the 710bhp factory figure. Yet even the ‘normal’ 720S’ exceptional performance isn’t enough for some, leaving space for companies like Novitec to unlock even more.

Three power levels are available, the most prolific of which giving the Spider an output of 794bhp and 646lb ft of torque, up 84bhp and 79lb ft over the standard model. Despite this hefty rise in power, no hardware changes have to made with only ECU tweaks to alter injection, ignition and boost pressure control needed for the gains.

This top state of tune reduces the Spider’s 0-62mph time to just 2.7sec, with 0-120mph flying past in 7.5sec and going on to a top speed of 214mph - all with the roof down. The brand’s own performance exhaust system is included with the top of the range tune, but can also be optioned at any level unlocking more sound and reducing back pressure. A selection of exhaust tips are available, as well as noise-reducing actuator flaps for early morning starts.

No Novitec-fettled car would be complete without a bit of additional carbon fibre, and the 720S Spider is no exception. As has become somewhat of a craze in the modified car scene since the Huracan Performante, carbonfibre is of the forged variety. 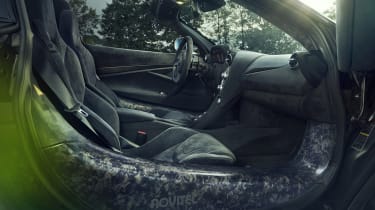 At the front is a new splitter and canards to reduce lift over the front axle, with new carbon headlight inserts, a more aggressive bonnet and carbonfibre mirror caps. A new diffuser and wing can also be found at the rear, alongside new rocker panels and intake covers - a more subtle rear lip can be optioned should you want to fly under the radar, in your modified 794bhp McLaren...

The body sits 30mm lower on new springs, and includes a set of staggered Vossen 20- and 21-inch wheels. The wheels are available in a myriad of different colours and finishes. And Should this all not quite be enough, Novitec also offers complete reupholstery of the interior to almost any colour you could possibly think of.