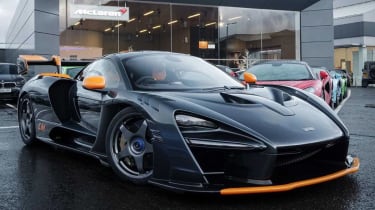 The McLaren Senna could never be accused of being soft, but its fierce track focus hasn’t stopped customers asking for yet more intense variants of the turbocharged supercar. One such example is this Senna ‘LM’, a bespoke commission by McLaren Glasgow that channels models such as the F1 GTR LM of the past in its final specification and design.

Despite the nomenclature though, the Senna LM is not a road-going version of the Senna GTR, the standard Senna’s non road-legal sibling. Rather, it’s a mostly aesthetic upgrade completed by McLaren’s MSO department, with plenty of subtle nods to the F1 GTR LM of the mid-’90s.

The first and most obvious element is a set of simple five-spoke centre-lock wheels, which mimic the design of those on the F1 GTR LM, adding a motorsport look to the otherwise highly stylised Senna bodywork. Also bespoke to the LM are the high-mounted exhaust outlets, which differ from both EU- and US-market variants with four circular tips – referencing the F1’s use of gold leaf as a heat reflector on top of the exhaust silencers.

MSO’s influence is also clear in the bespoke front wings that are now vented, and the extensive application of carbonfibre and orange highlights around the nose, mirrors, rear wing and the secondary internal surfaces around the rear deck. 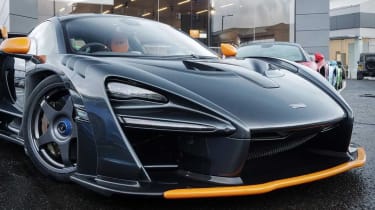 Inside the cabin, the Senna’s one-piece carbon bucket seats are trimmed in the same orange fabric as the external highlights, with a corresponding centre stripe on the steering wheel. No specific technical details have been released, but it’s expected that the package is standard, featuring the familiar 4-litre twin-turbocharged flat-plane V8 engine and seven-speed dual-clutch transmission.

Unfortunately, the possibility of a factory McLaren Senna GTR LM is unlikely as McLaren says that it would essentially return to its standard Senna state, such is the technical extremity it’s already designed to. Still, as the Senna and its GTR sibling get closer to the end of their respective production runs, it will open up manufacturing space for one of McLaren’s most exciting Ultimate Series models yet, the Speedtail – a model we can’t wait to see on the road. 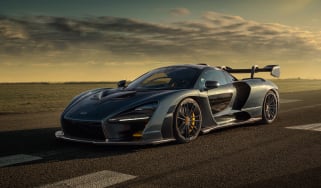