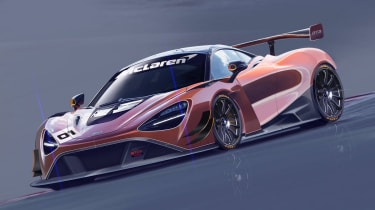 McLaren has revealed the first images of its latest project - a GT3-spec race car based on the 720S Super Series supercar.

Due to begin testing in 2018 for customer use in 2019, the 720S will join McLaren’s widespread racing efforts in other disciplines, following in the footsteps of the successful 12C and 650S GT3 cars and running alongside the 570S GT4.

As with all GT3 cars, the 720S GT3 is predominantly based on the 720S road car, but features significant alterations in certain areas to prepare it for the heat of competition.

At its heart is the same MonoCage II carbonfibre monocoque you’d find in the road car, bolstered by a full roll cage, while sitting amidships is a motorsport-prepared version of the M840T, 4-litre twin-turbocharged V8. No power figure has been confirmed, but balance of performance regulations in GT3 racing will no doubt render it less powerful than the 710bhp road car - the existing 650S GT3 is said to make just shy of 500bhp.

The road car’s transmission makes way for a competition six-speed sequential, while the body panels - formed from carbonfibre and other composites - are subtly different, and there’s full aero package including a splitter, flat floor, dive planes and a sizeable rear wing. 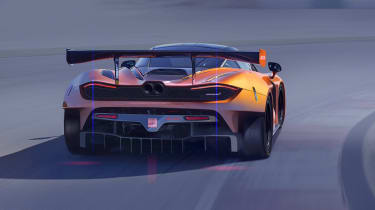 The wheels - wrapped in Pirelli tyres - are secured with centrelock nuts and the axles are also specific to the race car. Dampers are adjustable front and rear. Inside, the driver sits in an FIA-approved race seat and is secured by a six-point harness.

The 720S GT3 will have some work to do to match the success of its predecessor, which has taken GT3 titles in the Asian Le Mans Series, Australian GT Championship, the Bathurst 12 Hours, Blancpain Endurance Cup and Pirelli World Challenge - though improvements in the 720S road car should give the racer a fairly good head-start.

McLaren says the car (and motorsport service to support it) will be available from ten of its existing retailers across the globe, with two in Europe (Glasgow and Zurich), six in North America and two in the Asia-Pacific region - including McLaren’s spiritual home of New Zealand.

Additionally, the firm will launch a single-make McLaren GT race series in 2018 as a development of its existing customer trackday series - echoing similar series from Porsche, Ferrari and Lamborghini which, alongside a new Driver Development Programme, is sure to help McLaren discover the next generation of GT-driving talent for its top-level vehicles.

Four British drivers have already been selected for the programme, who will compete in pairs in two 570S GT4 cars during the 2018 season, under the mentorship of McLaren factory driver Rob Bell.