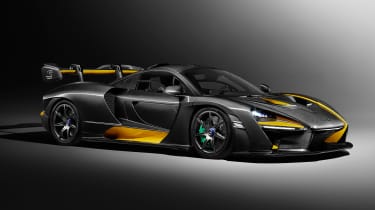 Ahead of its Public debut at the Geneva motor show next week, here’s another set of studio images of the extraordinary McLaren Senna 'Carbon Theme'.

This one has been worked on by McLaren Special Operations (MSO), as if the Senna wasn’t already special enough, and its bespoke nature probably reflects more closely how the majority of the 500 cars will actually be specified by their lucky first owners. Consider, for a moment, that the MSO elements to this particular car cost more than a well-optioned 720S alone…

The most obvious is the Visual Carbon Fibre exterior, consisting of 67 parts and taking almost 1,000 hours to produce. MSO has combined that with yellow detailing on the sills, rear wing and front active aero blades - another 250 hours of work - along with green brake calipers, the two colours a nod to the helmet design of Ayrton Senna. Those two hues are carried through into details of the interior, such as the stitching, in stark contrast to the Carbon Black Alcantara trim. In addition, the legendary driver’s familiar ‘S’ logo appears on the headrests but also on the end plates of the Senna’s enormous rear wing, achieved by embedding the logo into the carbon fibre panel.

Of perhaps more interest to us, this car also features new MSO aluminium/carbon hybrid wheels that are 10% lighter than the standard aluminium Senna rim. Senna customers can also specify red or blue centre lock wheel nuts to go with them, if they’re feeling so inclined.

The McLaren Senna costs £750,000 but is already sold out ahead of its official launch. This particular car suggests the final price paid by those 500 customers will probably be a good deal higher.