New McLaren MP4-12C review countdown: evo's John Barker was one of the first journalists to test the McLaren F1. After 15 years, they meet again 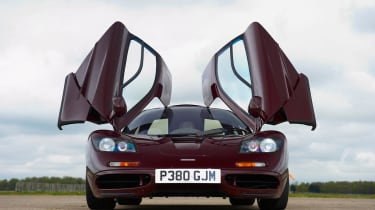 Inch by glossy inch, the McLaren F1 emerges from the unassuming box trailer, its fanfare the slow, gritty whirr of the winch. Moments later it’s sitting there in all its understated glory, the greatest supercar the world had ever seen, the best car in the world, circa 1994.

The F1 moved the supercar game on so far that it was over a decade before any other road car got close to its performance, and even though its headline figures have now been bettered, some would argue that as a complete car the F1 is still without peer.

Can it be so, despite the relentless pace of automotive development, despite the advances in materials, tyres and brakes, engine and gearbox technology and electronic control systems? The F1 has aged well aesthetically, which is the reward for not being fashionably styled at the time, but there are clues that it is not a recent design. Notable is the lack of obvious aerodynamic kit, such as a low front splitter and rear diffuser, and the tyres are rather plump, especially at the rear, but even when the car was revealed in the early ’90s these aspects of the F1 pointed up Gordon Murray’s uniquely informed approach to re-setting the supercar benchmarks.

It’s been a long time. I last drove an F1 in 1995. Even now I’m still not sure how we managed it, but we convinced Ron Dennis to authorise a clutch change so that we could have the car for a couple of days for our Performance Car feature. We did just what you’d do with the world’s fastest, most powerful, most expensive car: we took our mates and our folks out in it, cruised around town and drove some of our favourite roads. We all came back with a bundle of unforgettable experiences. Mine include hitting the limiter in fifth on a Yorkshire B-road without really trying, setting a still unbeaten 167mph record between the roundabouts near the office while trying quite hard, and getting deep into three figures on a wet dual carriageway with the bobbing, grinning head of a policeman in each rear-view mirror.

When my mind settles on the hard points of driving the F1, I recall the phenomenal power and reach of the BMW V12 and, just as strongly, the heavy, unassisted brakes and steering, which made you think hard before exercising it fully. Gordon Murray wanted minimal weight and maximum feel, and he got them, but I felt they came at the expense of properly engaging and adjustable handling. The supercars that followed in the F1’s immediate wake didn’t go down the same road, and those of the last ten years, from Ferrari and Lamborghini, Porsche and Bugatti, Pagani and Koenigsegg, have been considerably more user-friendly thanks to the universal fitment of power steering, anti-lock brakes and, at the very least, traction control. I’m worried that, 15 years on, the McLaren will feel like a throwback.

Up close again, the F1’s sensational finish and build quality are evident, from the flawless mirror finish of the paint to the pristine nap of the suede and leather interior. This generously loaned car has over 36,000 miles on the clock but inside looks almost brand new, apart from the perforated suede section of the steering wheel, which looks grubbied and roughed up. No surprise there, though.

McLaren has sent along its long-standing F1 road car test driver, Peter Taylor, to look after us today, and he takes the car for a few laps to check it over and establish that all is in order. It clearly is and he offers a passenger lap or two to remind me of the car’s characteristics. evo has been to Bruntingthorpe’s XXL runway on a number of occasions to get big numbers from other supercars and come away disappointed, and back in 2003 we trekked to Germany to top 200mph. I’m soon wondering why.

I slip into the fixed, bucket-like, surprisingly comfortable left-hand passenger seat and I’m reminded how inclusive the F1’s unique three-seat layout is. I can see most of the instruments and the driver’s feet on the pedals, and I have a great view out of the low windscreen. It’s an almost cinematic experience, the view in Panavision widescreen and the V12’s voice as it gulps air via the roof-mounted intake a sort of Dolby surround-sound experience.

As Taylor had described, there is nothing amiss with its performance. Working it nicely through the long, long right-hander onto the main runway, the F1 feels settled into very mild understeer, the balance changing to neutral as Taylor gets back on the power fully and unwinds the lock as we join the main runway. We’re already motoring and four crisp 7500rpm upshifts later I look to the speedo with mild curiosity and do a double take. We haven’t crested the rise yet but the fine white speedo needle is swinging through the 180mph mark. Over the other side the needle climbs steadily to 200mph and beyond before Taylor gets on the brakes. That was ridiculously easy.

‘It’s best to stay off the expansion joints,’ says Taylor after a second 200mph-plus run, ‘and keep an eye on the windsock, too.’ Ah, that’s it then; the car was wandering more than on the first run because of a crosswind.

McLaren wanted the F1 to be everyday- useable and its compact dimensions (it’s 911-sized) and the lack of front and rear overhangs mean that speed humps hold no fears. But it feels like there’s not an over-abundance of downforce at very high speeds, even with the flip-up rear spoiler cranked to its most vertical setting. That said, this slipperiness contributes to the F1’s exceptional 240mph top speed.

My turn. Slide across the front edge of the left-hand passenger seat, hoik legs over the tall carbonfibre channel and then settle backside into the slim but instantly comfortable driver’s seat. And drink in the view. Wow. I’d forgotten how extraordinary the central driving position is, and how obviously right. The symmetry, the exceptional visibility, the feeling that you’re right at the very heart of things, that the car is built around you, the driver. Yes, it’s a bit of a faff getting there, but the rewards are great.

Twist the key, flick the safety cover off the starter button and rouse the V12. Snick the tall gearlever into first, ease the carbon clutch in without bothering the throttle and you’re away. The tractability of the 6.1-litre V12 is such that, as Taylor has demonstrated, it’s possible to go up through the box on tickover, and then floor the throttle in sixth without the merest hint of a stumble or a murmur of protest. This is an exquisitely tuned monster of an engine, and even pulling a top gear good for over 230mph, the F1 soon picks up pace and strikes out for the horizon. It’s a perfect illustration of the irresistible combination of big-capacity torque and a minimal kerb weight.

The lack of flywheel effect in the engine ensures that the revs flare and die back almost instantly, which is another factor in the F1’s amazingly crisp, clean throttle response. It also means that you’ve got to be positive and accurate with the gearshift, clutch and throttle; conducting the McLaren smoothly demands finesse, but the satisfaction of getting it just-so is ample reward. The biggest surprise as we mooch around for the camera is that the steering is perfectly weighted and brimming with textured feel. I don’t remember this, though I later learn that Gordon Murray reckons this particular F1 has the best steering feel of any he’s driven.

With the tracking shots bagged, I get the thumbs up and, ambling in second gear at a steady 3000rpm, I floor it. It feels like time travel; the F1 is gone, seemingly before the staccato bark of the engine digging deep has reached your ears or the throttle pedal has hit the stop. Sure, there’s a mighty engine in the back but the ease with which the F1 gains speed is uncanny, and although the engine sounds vocal, it spins very smoothly.

The ride is surprisingly supple too. Get on the brakes and the nose dips, tack into a corner and there’s a degree of roll, power up for the exit and the nose lifts again. Despite the name of the car and the motorsport experience behind its design and construction, it’s no race car in disguise. Yet there’s no slack, no lost motion either; a polished, instantly responsive feel permeates the F1, and the level of feedback and feel it delivers is unmatched by any other supercar.

Sweeping out on a wide line through the last corner, brushing the concrete kerb on the inside, you can feel its gentle ridges in detail through the rim of the steering wheel, and that’s followed by the crinkle-cut surface and the vein-like joints between the concrete sections of the runway on the exit. This is the car wrought as an instrument, a precision instrument.

The steering piles on weight in the faster turns, though, all the time relaying the level of detail you need and want but at the same time cautioning against getting too ambitious with the throttle. Many current supercars allow easy, risk-free access to their full performance, with power steering making their fat front tyres manageable and sophisticated stability control systems letting you know you’ve been over-ambitious by blinking a little yellow warning light and gently keeping a cap on things.

I didn’t want to overstep the mark when I first drove the F1 and I don’t today. I have no idea what a Bugatti Veyron would do without its stability control, or quite when it might do it, but I have a good idea of what the F1 would do, and it would involve not catching an oversteer slide. I remember watching one of Martin Brundle’s videos and seeing the look on his face when the rear of an F1 he’d borrowed stepped out in a straight line, in the wet, when he gave the throttle a good poke. Had there been subtitles, the words ‘Oh Lord, please, no’ would have appeared beneath his slack-jawed mug.

So although it has a finely responsive, torque-heavy, naturally aspirated engine tailor-made for on and just over the limit play, that’s not in the F1’s repertoire. But it doesn’t matter. The aural richness of this engine and its sparkling delivery, whether it’s lugging a high gear from low revs, keening to the red line, or anything in between, makes it utterly compelling.

Fifteen years on, the world has yet to welcome a better packaged, better finished or more habitable supercar. Or one that’s as potent, light and tactile. I admire the Bugatti Veyron, which has been developed just as fastidiously, but it’s a blunt instrument in comparison, a carpet bomber as opposed to a laser-guided missile. And although it does 253mph, the Veyron hasn’t moved the supercar game on.

The next generation of supercars will be smaller, lighter and more efficient. In other words, more like the McLaren F1, though there’ll probably never be another supercar that puts its driver so at the centre of things and so in charge of their own destiny.