Launched in 1992, the McLaren F1 has surely played host to more superlatives than any other supercar before or since.

While no longer the fastest car in the world, nor the quickest accelerating, it's held in high regard around the world as much for its engineering as its performance.

That it remains representative as the peak of 'analogue' supercars – those completely unfettered by driver aids, automatic transmissions, sophisticated traction control setups and turbocharging – is also key to its appeal.

evo has driven the F1 on several occasions, most recently in issue 205 when Richard Meaden compared it with its modern successor, the McLaren P1. While impossible to pick a winner on objective terms, Dickie did note that the F1 'is a freakish work of true genius and an impossible act to surpass', so one can draw their own conclusions.

Prior to that, the F1 took centre stage in issue 186's ultimate analogue supercar test, against such luminaries as the Porsche Carrera GT, Pagani Zonda F and Ferrari F50. Once again, no winners, though the McLaren (along with the F50 and Carrera GT) stood clear of the rest for their 'intensity, clarity and purity' and their ability to enthral through their experience rather than outright speed. 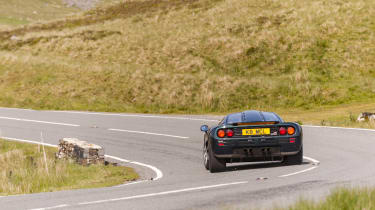 At this weekend's Monaco Grand Prix – not a particular high point in the season for the McLaren F1 team it has to be said, but not as low as they've been either - McLaren re-published the original McLaren F1 press release in full.

It marked 24 years since the '92 Monaco Grand Prix, where the F1 was first presented at the Sporting Club Monaco. At the time, McLaren had won seven of the previous eight drivers' titles (adding three since, in 1998, 1999 and 2008) and was on a high.

Its name implied an F1-inspired ethos but its technology was inspired by the pioneering early days of motoring, from bespoke specification options for buyers to a completely clean sheet in terms of engineering.

The press release is realistically far too in-depth to justify cherry-picking specific facts, so instead we've chosen to reproduce it in full - from then-chairman Mansour Ojjeh's introduction to in-depth looks at every aspect of the car's engineering and construction.

As for how it drives - well, you can hopefully get some idea from the videos we've produced on the F1 over the years. You can find those below, check our gallery of images shot by Dean Smith and Aston Parrott, and click on the menu above or below to see the original press release in full.