In the F1, McLaren Cars has thrown away the rule book, and begun anew to avoid perennial supercar problems… Probably more deign effort has been invested in the F1’s ergonomics and controls than in any other area. In a Formula 1 Grand Prix car, the driver must be placed in absolute control.

The F1 design team has  worked unremittingly to site every primary and secondary control in precisely its proper place.

One powerful tenet of F1 design has been to overcome many of the old-established layout problems usually affecting mid-engined road cars.

These often result in offset primary controls which are forced towards the cabin centreline by front wheel-arch intrusions. There is an awkward compromise between turning circle – indicating front-wheel steering lock – and driver pedal space.

The F1’s one-plus-two seating configuration avoids any such compromise. Its centreline driving position offers a spacious footbox with perfectly aligned pedals tailored to each individual owner’s preference. A lightweight carbon-composite seat finished in padded Connolly hide is moulded and tailored in Formula 1 style to each owner’s form. 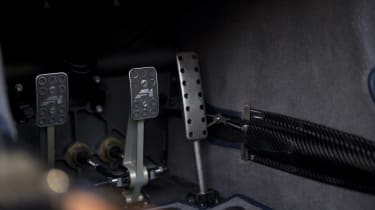 Much design time has been devoted to centre-drive support. Visibility is outstanding. Even the grip shape of the specially-made Nardi F1 steering wheel involved many hours of research, design and development. Steering is weighted for the driver. Nothing is allowed to mask steering ‘feel’. A minimal Formula 1-style dash panel in carbon composite presents clear specially-made analogue instrumentation, plus a liquid crystal computer read-out screen.

Passenger space and comfort have not been forgotten. The McLaren F1 can accommodate two 95 percentile adult passengers – an industry standard indicating that only 5 percent of the population will be taller – in secure, safe and air-conditioned repose – providing yet another feature unmatched by any other supercar.