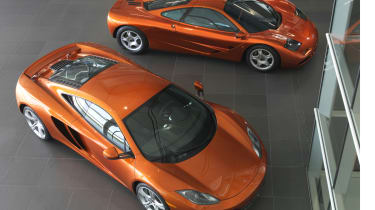 The new McLaren supercar is finally here. Over 15 years after the legendary F1 was put into production comes this, the rather more intricately named MP4-12C.

McLaren admits it’s inspired by the firm’s halo car, while there’s a clever new chassis architecture and a host of Formula 1 technology on board.

It is an entirely new car, with no carryover parts from other models (so no link to the outgoing Mercedes McLaren SLR), its heart being a bespoke new engine. It’s a 3.8-litre twin-turbo V8 that boasts 600bhp and, apparently, the highest specific power output in its class. Torque is rated at 442lb ft, 80 per cent of which is available from below 2000rpm.

Look at 0-60mph taking sub-3.5sec and a maxium speed beyond 200mph. And while there are no firm emissions figures yet, McLaren promises the highest bhp to CO2 output figure of any car on sale with an internal combustion engine. That's some claim.

It’s achieved via a number of technologies that aim to put the mid-engined, rear-drive 12C ahead of the game in the mid-size supercar class.

The car’s main structure is a ‘Carbon Monocell’, a concept lifted straight from grand prix cars. It’s a carbon monocoque shell, which provides a supremely strong structure that also shaves a lot of weight compared to more conventional setups.  It provides a narrower overall shape to the 12C that makes it more compact and usable, as well as aiding the dynamics. The weight distribution is 43/57 front/rear.

To keep in touch with the Ferrari 458 Italia – the 12C’s key foe – there’s a seven-speed twin-clutch gearbox dubbed ‘Seamless Shift’. It’s a lightweight system, and as with competitors, boasts a number of modes (including auto, sport, winter and launch control). It differs, however, in that its paddles (left for down, right for up) operate as one big rocker switch, meaning you can pull or push them to change gear, as in Lewis Hamilton’s Formula 1 car.

More weight-saving tech comes in the shape of composite forged aluminium and cast iron brakes, light alloys and clever positioning of all of the car’s components – including the engine’s radiators – to cut unnecessary pipework.

Other technology includes Brake Steer – which stops the inside rear wheel spinning to cut understeer during fast cornering – and proactive suspension – a system that gives complete control over the car’s tendency to roll, using hydraulically interconnected dampers (doing away with anti-roll bars) to vary the amount of body roll the car will allow. The idea is to blend immense grip levels with class-leading ride quality. We look forward to finding out if it works.

The styling is, to some eyes, quite tame. Ignore the burnt orange paintwork and trick doors and the MP4-12C breaks little ground, but according to McLaren, it’s the supercar that doesn’t shout about its extreme performance, something that many buyers will crave in a market with increasing hostility towards high performance machinery. It certainly won’t stand out like that pesky Ferrari will.

And if you’re wondering about the name, MP4 is the chassis designation of McLaren’s GP cars, the C denotes the new supercar’s carbon chassis, while 12 is how the car scores on the company’s performance register that uses a secret formula to compare cars, taking into account power, weight, emissions and aerodynamics. We've no idea what its key rivals – the Ferrari 458 and Lamborghini Gallardo – or, indeed, the McLaren F1 score. There’ll be future McLaren’s that hit higher numbers, though…