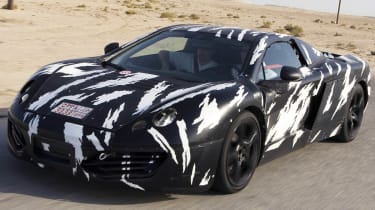 The McLaren MP4-12C’s development is coming along quite nicely, and the British supercar maker has released a video to prove it. McLaren has made its Ferrari 458 rival endure the usual array of torturous tests, with the usual visits to the ice and snow of the Arctic and sand and sun of the Middle East alongside copious lapping of both the Nürburgring Nordschleife and Dunsfold Aerodrome, the home of the Top Gear test track.

Click here to watch the McLaren supercar video Chief Test Driver at McLaren Automotive, Chris Goodwin, said – ‘McLaren has always set itself the highest standards. We are the most successful ever motor racing team, we designed and built one of the world’s most iconic sports cars in the world in the McLaren F1, and pioneered carbonfibre development on race and road cars. ‘We took those standards into the development programme for the MP4-12C in order to launch a new high performance sports car comparable with past achievements and offering new levels of performance for the future. For us, these targets were simply starting points and that attitude requires the most thorough development possible. We believe that our global testing is delivering incredible strides for the 12C.’ Highlights of the development can be seen in McLaren’s video, which is intended to be the first in a series that’ll be drip-fed as the MP4-12C moves closer to production, giving a rather nifty insight into the company’s stringent testing procedures. Click here to view ‘Inside McLaren: developing the MP4-12C’Browse through our pic gallery and tech insight on the new Mac Follow evo on Twitter for the latest on this and other supercars