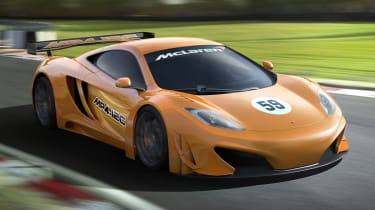 It’s been 15 years since the McLaren F1 GTR famously won the world-famous 24 Heures du Mans on its debut, and 12 years since six ‘Longtails’ last raced at Le Mans, but McLaren has confirmed it will be returning to sportscar racing in 2012 with the MP4-12C in the GT3 category. As part of the development programme, McLaren and CRS Racing will also compete at a limited number of European GT races in 2011. With the 12C’s lightweight one-piece moulded carbon chassis, its high levels of downforce and aerodynamic performance in road-going form, the 12C should prove to be a great platform on which to develop a racing car. Martin Whitmarsh, McLaren F1 Team Principal said: ‘Racing is in our blood – it was natural to develop a GT3 car alongside the 12C road car. We have a legendary history in global motorsport, including GT racing, and we aim to maintain that reputation with this GT3 programme, and any future sports car projects that may evolve. ‘The 12C’s architecture and design was always aimed at high-performance and ease of maintenance - two key criteria for potential customers. Combine that with the vast amount of racing experience in our automotive team, and CRS Racing’s specialist development experience, and the 12C GT3 should be an exciting proposition for the top teams planning torace in GT3 from 2012.’