A McLaren MP4-12C supercar crashes at the Nurburgring. Was it going for a Nordschleife record? 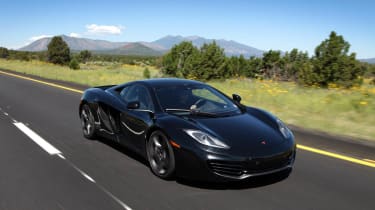 McLaren has dismissed suggestions it was attempting to set a record lap time at the Nurburgring when an MP4-12C collided with barriers at high speed.

Witness reports from the circuit stated that the 592bhp, twin-turbocharged supercar was traveling ‘flat out’ prior to the incident, which happened out of public sight near to the Nordschleife Zufahrt car park, on Friday.

Nurburgring bloggers on bridgetogantry.com reported that ‘tyres were screaming and witnesses reported the sound of a large impact. Shortly afterwards a covered truck recovered a wrecked car.’

The high speed incident, which is believed to have occurred towards the end of a scheduled test session at the Green Hell, prompted speculation that McLaren had been had been attempting to set an official lap time in the MP4-12C ahead of first deliveries of the car to customers.

But, speaking to evo this week, a McLaren spokesman said that was not the case. ‘The run came as part of the development program. The car was out there completing laps as part of ongoing tests and wasn’t trying to set a benchmark time. At this point we’re not trying to set lap times but we’re confident that the car will be very fast around the Nürburgring when the time comes. The data that we’ve gathered so far is extremely promising.’

‘The MP4-12C involved in the incident wasn’t even a production spec car’, he added.

The McLaren spokesman would not confirm whether Friday’s incident at the Nurburgring had come about as a result of driver error or a technical malfunction, but confirmed that the car had returned to the McLaren Technical Centre in Woking, where engineers were investigating the incident.

Our McLaren MP4-12C review and video is here