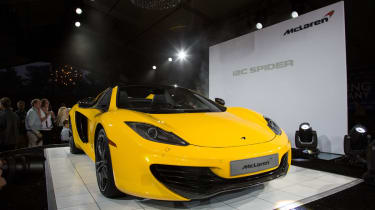 McLaren has pulled the covers off the its recently announced 12C Spider during a Gooding & Company auction preview at the Pebble Beach concours.

It's been a busy week for McLaren, also revealing its one-off X-1 Concept, before displaying its new 12C Spider on the lawn at Pebble Beach - the first public showing for both cars.

The Spider is on sale now - starting from £195,500 - with deliveries expected to commence in November.